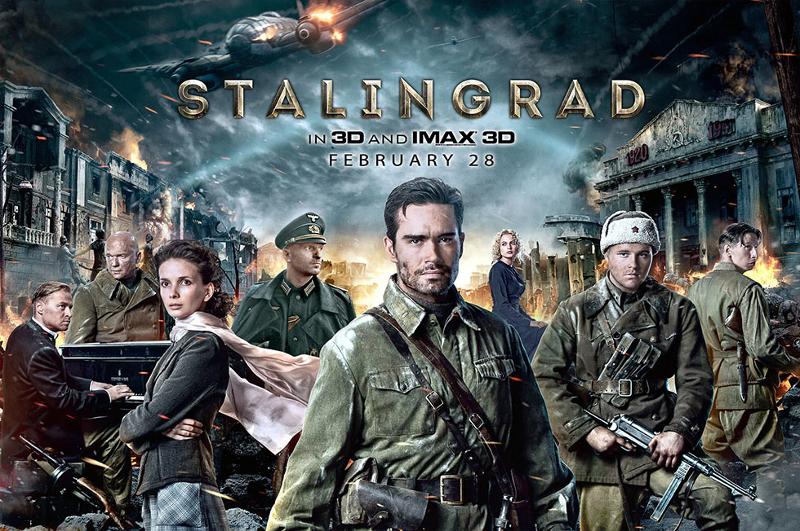 "Stalingrad" is the highest-grossing Russian film of all time and is the first Russian film made in native Imax 3D.

The story opens and closes, for some strange reason, in the present time as Russian emergency aid workers are rescuing German teens from the consequences of a Japanese tsunami.


We then move to Stalingrad in September 1942 as a group of Soviet reconnaissance troops are sent into the city to prepare the way for a larger landing of troops that are poised across the Volga River. The troops must capture an apartment building before the Germans, who are within, are able to blow up a fuel dump. After some brutal and ferocious hand to hand fighting six survivors find themselves within the crumbling apartment block. Taking charge of the motley crew of sailers, radio operators, snipers and foot soldiers is Captain Gromov (Fyodorov). The soldiers then find Katia (Mariya Smolnikova) still staying within the building. Katia being the only member of her family to survive the German army's occupation of their family home.


The Germans opposing them are lead by Captain Kahn (German actor Thomas Kretschmann's) who is ordered by his commander to take back control of the house as a Russian sniper is picking off his men from the top floor.

Ilya Tilkin and Sergei Snezhkin’s screenplay is based on various chapters from the epic novel "Life and Fate" by the once-banned Soviet writer Vasily Grossman, who wrote eye-witness accounts from the front line as a war correspondent.

The problem with "Stalingrad" is with the characterisation. The Russian soldiers are each in their own way drawn to Katia and each treat her like some angel that has fell from heaven. The one problem and the thing that hurts the film most is that we never got to know any of them well enough to really care about what ultimately happens to them.

The story as it unfolds plays out like a melodramatic soap opera. This is in part down to the directors decision to take most of the story no further than the confines of the ruined building. As an audience we never got a chance to appreciate how vast the battle is and how important the defence of the building is to its occupiers. With the exception of a few outstanding action sequences, a magnificent CGI shot of a German bomber crashing in the square and the burning of fuel tanks as the Russians attack being amongst the highlights.The action is confined to the building and the square immediately in front of it.

Filmed in native 3D the film looks fantastic and is easily some of the best use of 3D since "Gravity". From claustrophobic shots down stairwells to the ash from the burning buildings that permeates through the air and drifts to earth like snow there's not a shot in this film that is wasted. Unfortunately for this review the film was screened in standard 3D and not in Imax. If you can catch it in Imax do so as I would imagine that the visuals will be nothing short of breathtaking.

If your going to see "Stalingrad" go and see it for it's visuals and make sure that you see it in 3D and on the biggest screen that you can. I'm sure that you won't be disappointed.