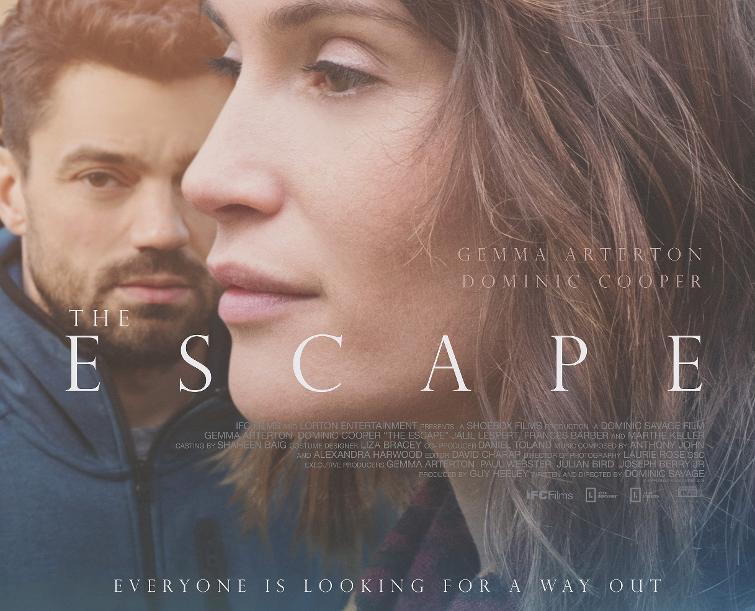 Gemma Arterton is starting to become the darling of the Glasgow Film Festival. After last year’s screening at the festival of her film, Their Finest, she returns this year in person, even a blizzard couldn’t keep her away, for a screening of her latest movie, The Escape.

In The Escape, Arterton, wonderful in the role, plays Tara, a young married mother with two children who is starting to doubt her own worth and her very existence. Every day life is the same, her husband Mark (Dominic Cooper) goes to work and leaves her to deal with the children and the domestic chores. Her only spell away from her home is when she goes to the supermarket or to pick up her children from school.

Slipping deeper and deeper into depression she eventually tells her husband, after one of their many sexual encounters where it’s obvious that the only one getting any pleasure from it is Mark, “I’m not happy and I need to do something else”, referring to their marriage, not the sex, or maybe it was the sex, you can make up your own mind on that one.

Director Dominic Savage uses close ups for a lot of the running time, he particularly focuses for large parts of the film on Tara’s eyes, which as her depression deepens, become sadder and sadder.

Stuck in a life that she slowly starts to realise she no longer wants, she tells her husband that she no longer cares for the children and doesn’t care if they get dressed or go to school. Tara then leaves the family home and heads off to Paris in the hope that she might find the happiness there that she can’t find in her own life back home.

As Tara’s story unfolds it becomes harder and harder to have any sympathy with her.

In a Paris museum she meets a French photographer and both are immediately attracted to each other. Whilst walking around Paris they confide in each other, she telling him that she doesn’t have a boyfriend, he telling her that “he doesn’t have time for a girlfriend”.

The couple then spend the night together, but in the morning the photographer’s mobile phone rings and she sees a picture of a baby on the screen and before answering he terminates the call. When he’s quizzed by her he admits to having a child and a wife, “but they’re going through a divorce” he tells her. Finding this out she tells him that he’s lied to her and tells him to leave her room immediately.

The photographer for all intense and purposes is Tara, she also has a life that she won’t take responsibility for.

In spite of the title it’s hard by the end to actually see what Tara is in fact escaping from, is it depression, is it her life, is it her marriage, or is it in fact her own children?

There are those who will see Tara as the victim and those that will see her two young children and to a lesser extent her husband, who could have done more to help solve his wife’s problems, as the actual victims. I’ll make no judgments and leave it for you to decide who the actual victim is in this sad tale.