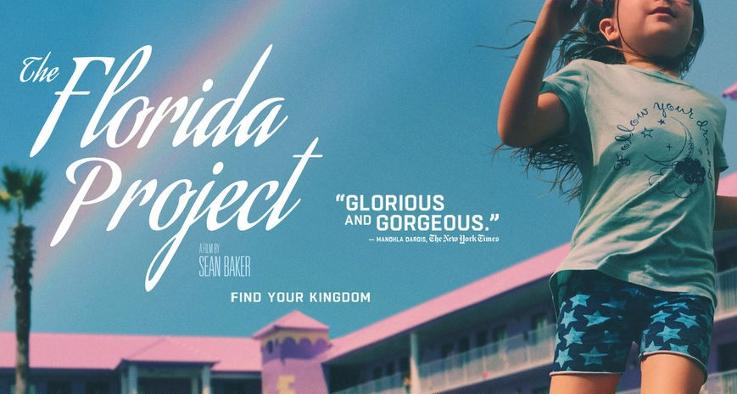 As well as the slightly false advertising of the motel's name (as one honeymooning couple arriving discover to their disappointment), there are reminders of the World of Disney everywhere, from cheap merchandise sold in stores along the highway, to a Seven Dwarfs Lane road sign and the fireworks Halley takes Moonee and Jancey to watch from outside the park. Even the film's title is a reference to the top secret code name given to the amusement park before it was built. Though here it also suggests the low-rent accommodation that people have no choice but to live in. Despite the proximity, Disney World might as well be a million miles away from the motel and its slightly seedy surroundings.

A little more money and being clearly shot on something a bit fancier than an iphone doesn't seem to have affected Baker's knack for capturing those that live on the margins of society in a loose and unsentimental fashion.


Those wanting a clear linear plot should go elsewhere but if you settle into its episodic rhythm, there are plenty of treasures within. Beautifully directed and shot, capturing the often garish and unique Florida architecture in bright colours, the film is visually interesting throughout.

While a great, mostly unknown, cast impress. Like Tangerine before it, The Florida Project shows Baker's ability to get amazing performances from inexperienced actors. Brooklynn Prince steals the film as Moonee, rebellious and out of control but still very much a kid, it's a wonderful and very funny performance. Bria Vinaite is also very good as Halley, more a big sister to Moonee than a mother and prone to some pretty disastrous choices when it comes to making money, she also clearly loves Moonee and the two actresses have fantastic chemistry with each other. Valeria Cotto and Christopher Rivera also make fine debuts as Jancey and Scooty.


The casting of a name actor amongst the unknowns could have been jarring but Willem Dafoe is utterly convincing as Bobby, a man who has clearly seen his fair share of Halley and Moonee's come and go in the motel but can't help but be protective towards them, no matter how frustrating they can be. Blue Ruin's Macon Blair and Caleb Landrey Jones also have brief but memorable roles.

Overall this is a beautifully made film that manages to remain true to the harsh realities of fringe living, whilst conveying the almost magical and carefree way kids have of dealing with it. Another glorious and unmissable feature from Sean Baker.