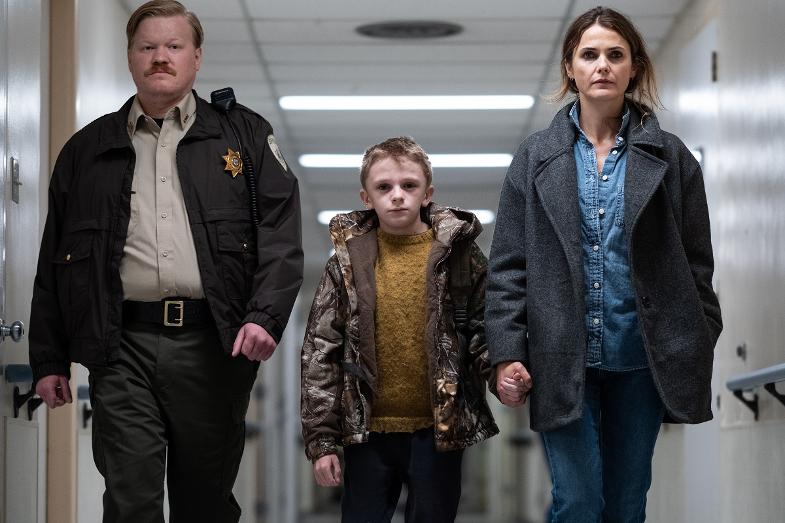 A film based on a short story doesn’t always work well given that what is after all a short story has to be expanded to the length of a feature film. Antlers which is based on the short story “The Quiet Boy” is an example of how more isn’t necessarily better as Director Scott Cooper (Black Mass 2015, Crazy Heart 2009) and producer Guillermo Del Toro, who is well known for his line in gothic horror films, struggle to add any pace to a story that feels drawn out and at time ponderously slow.

Starting off in a mine in a small Oregon town, two miners are attacked by some unknown entity.

Months later we’re in a local elementary school where amongst teacher Julia’s (Keri Russell) pupils is a shy and reclusive kid called Lucas Weaver (Jeremy T. Thomas). Bullied by his fellow pupils Lucas has all the hallmarks of a kid who’s suffering neglect and to make matters worse his young brother (Sawyer Jones) has not been seen at school in a while, whilst his father (Scott Haze), who was last seen going down a mine, no prizes for guessing what happened to him, is nowhere to be seen.

When half eaten bodies start turning up in the woods Julia and her brother Paul (Jesse Plemons) start to suspect that it could be the work of the Wendigo, a malevolent spirit that feeds on humans. Stumbling about in the dark, it seems to be the thing in American towns, as was the case in the recent Halloween Kills that no one turns on their house lights, the siblings start looking for clues as to who’s committing the murders.

Antlers is an unremarkable entry in the horror genre and certainly one of the poorest horror films from the normally reliable Guillermo Del Toro.