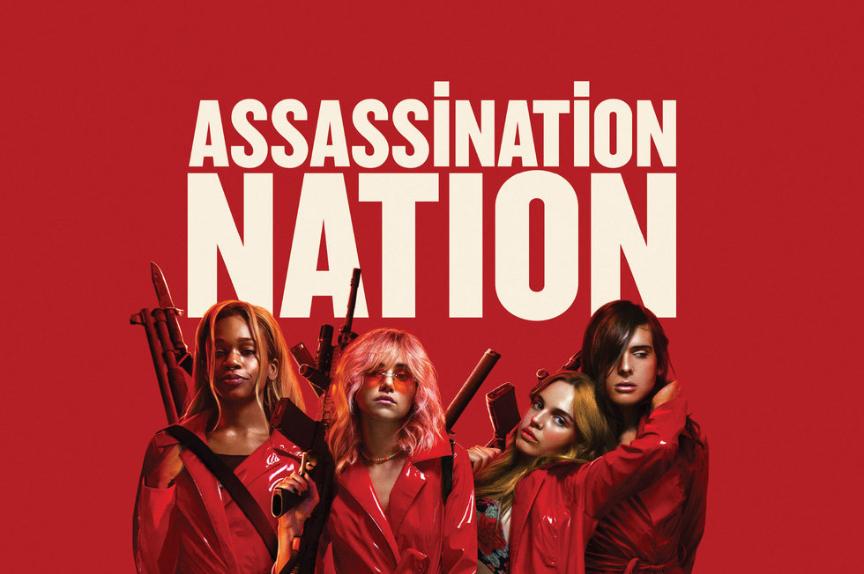 In the US town of Salem, a hacker is slowly releasing the darkest secrets of its inhabitants. A group of four teenage girls get caught up in the ensuing paranoia, chaos ensues and they have to fight to survive.

From the moment this starts with a series of trigger warnings letting the audience know which hot button topics are going to feature in the following 108 mins, Assassination Nation announces itself as a film that is likely to annoy and offend just as many audience members as it entertains. You'll probably know after this brash and obnoxious opening whether this film is for you or not. As it continues it has all the subtly of a blood soaked sledgehammer as it covers social media, toxic masculinity, race, transgender issues, child abuse, rape, cross-dressing etc, but it has an undeniable energy too and its willingness to tackle many normally taboo subjects is admirable. The excellent cast certainly helps, with Odessa Young, Hari Nef, Suki Waterhouse and Abra all great as the female leads, with Colman Domingo, Bill Skarsgard, Joel McHale and Kathryn Erbe all fine in support. Assassination Nation is admittedly imperfect, with a 'throw in everything including the kitchen sink' aesthetic in regards to controversial topics how can it not be? Overall though this look at the Salem witch trials through a modern lens has plenty of style to spare thanks to Levinson and White God cinematographer Marcell Rev, part of a home invasion scene filmed outside through the windows is particularly effective. This and the strong cast make it worth watching.
By Kevin Knapman
Assassination Nation (18)
1h 50m
Director: Sam Levinson
Starring: Odessa Young, Suki Waterhouse, Abra, Hari Nef, Bill Skarsgard, Joel McHale, Bella Thorne, Maude Apatow
UK Release: Friday 23rd November 2018
Assassination Nation - Clip
Assassination Nation - Trailer 2