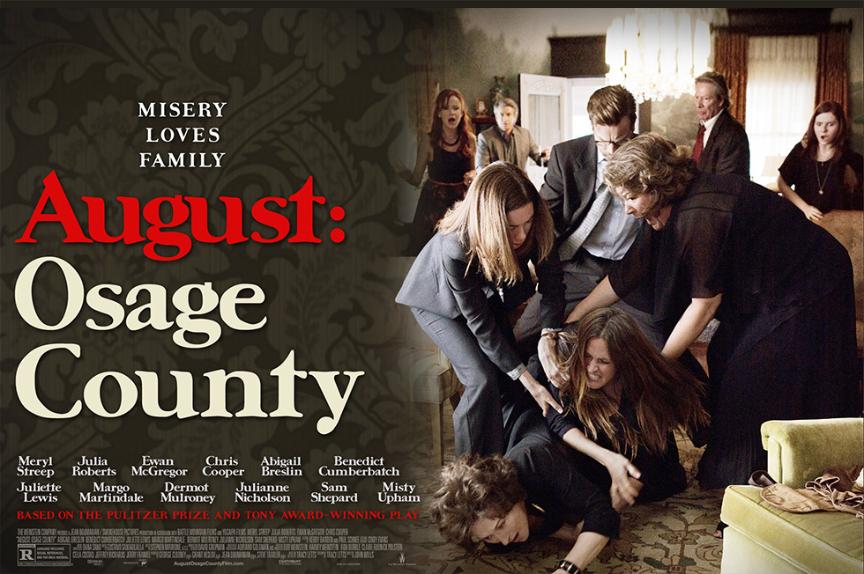 " August: Osage County" based on the play of the same name and directed by John Wells appears to be mostly faithful to the play as the camera has little to do but let the ensemble cast belt it out, and belt it out they do.

In Oklahoma, in August, Beverly Weston (Sam Shepard), a poet with a drinking problem, lives with his wife Violet Weston (Meryl Streep), who suffers from oral cancer and is addicted to prescription drugs. They have three daughters, Barbara (Julia Roberts), Karen (Juliette Lewis), and Ivy (Julianne Nicholson). Soon after hiring help to assist with the care of Violet, Beverly disappears. This brings the entire family, their significant others, and close relatives to the house. What ensues when this group is brought together is a chaotic melee, and none are exempt.

There is nothing subtle about the dysfunctional Weston family: drug, alcohol abuse, betrayal, physical and verbal abuse, jealousy, envy are all covered as each character implodes before our eyes and the family spend the following days bickering, fighting, and hurting each other in whatever way they can.

This is certainly Meryl Streep’s film as she goes at it with gusto and is given another chance to show off her generous talents as Violet, the pill-popping family matriarch with an acidic tongue. Julia Roberts plays her long suffering daughter while Margo Martindale also stands out as her sister. The cast includes a consortium of recognisable names and faces (Chris Cooper, Ewan MacGregor, and Benedict Cumberbatch to name a few).

The film will not be to everyone’s taste, at times it can be slow, talky and it certainly does feel like a stage play. However the acting from Streep and in particular Roberts, in her best role for years is nothing short of brilliant. Streep and Roberts exchanging extreme profanities over the dinner table isn't a sight that you will see every day.