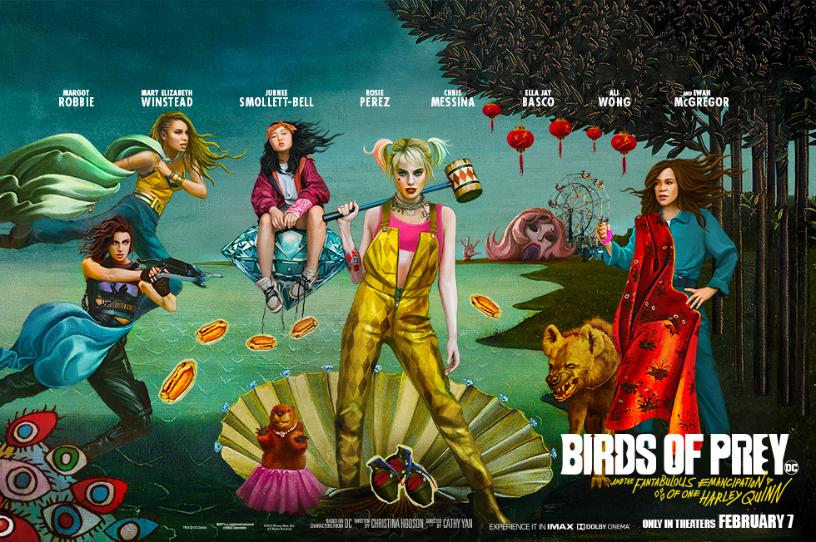 After Joaquin Phoenix’s excellent but sombre and dour portrayal of The Joker in last year’s movie of the same name, “Birds Of Prey: And The Emancipation Of One Harley Quinn” (to give it its full title) is a much more light-hearted affair.

Set immediately after the events of 2016’s “Suicide Squad” Harley Quinn (an excellent Margot Robbie) has just been dumped by her boyfriend, the aforementioned Joker (played by Jared Leto in Suicide Squad). Not now having the protection on The Joker it’s open season in Gotham City for any lowlife who has been wronged by Harley in the past and now wants to extract their revenge on her – and the list I can assure you is long.

The story is about as manic as Harley Quinn herself and involves Harley trying to retrieve, for underworld boss Roman Sionis aka The Black Mask (Ewan McGregor), a diamond that has a code for a bank account embedded in it.

Along the way she teams up with the birds of prey of the title: Renee Montoya, a hard working cop (Rosie Perez), a singer called Black Canary (Jurnee Smollett-Bell) and a vengeful killer with a crossbow called The Huntress (Mary Elizabeth Winstead).

As befits a movie where the heroes are all females the girls get to kick plenty of male butt as they search for the allusive diamond.

“Birds Of Prey”, as it moves from one action set piece to another, is a lot of fun but it’s wafer thin storyline and characters that lack much depth (with the exception of Harley Quinn herself) make it all feel all a bit lightweight.

“Birds Of Prey” is an enjoyable and colourful fast paced movie that includes a wonderful performance from Margot Robbie just don’t expect it to linger long in your memory the way her ex-boyfriend’s movie did.