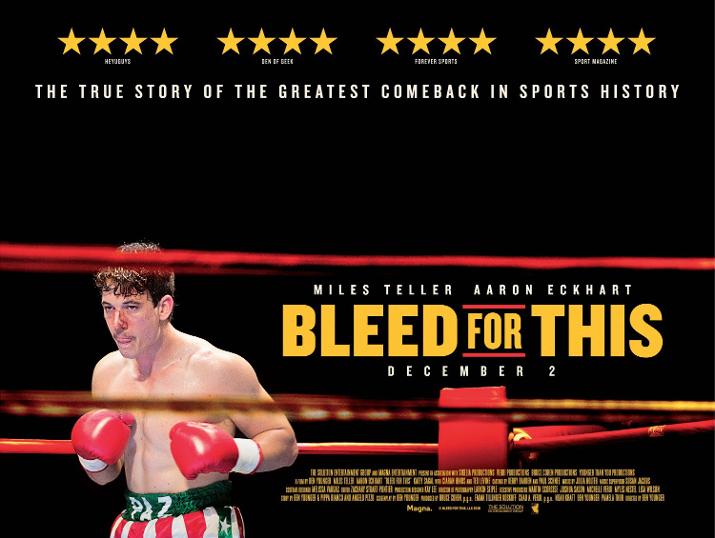 The true story of Italian-American Boxer Viny Pazienza is brought to the big screen in “Bleed for This”.

In 1991 Pazienza was at the top of the boxing world, having just become the WBA world junior middleweight champion, he was destined to become a boxing great. However fate had other ideas and shortly after becoming world champion he was involved in a terrible road accident where his neck was fractured.

Told by doctors that he might never walk again and that any jolt or knock could result in him becoming paralysed Pazienza decided that rather than having his spine fused, which his doctor recommended, he would put his faith in his own body’s power to self-heal.

Ignoring the advice of doctors Pazienza trained in a make shift gym in the basement of his mother’s house whilst wearing a halo metal brace that surrounded his head and that required bolts to be screwed into his head.

Miles Teller gives an outstanding performance as Pazienza and is ably supported by Aaron Eckhart as his trainer.

The outcome of the story is never in doubt and for a drama that’s never a good thing, “Bleed for This” is interesting story but it’s no more than that, never griping in the way that it should the whole thing feels at times like a stretched out documentary. Take away Tellers performance then what you’re left with is a film that’s pretty ordinary, unless of course you’re a massive boxing fan, if you are then this will be right up your street.