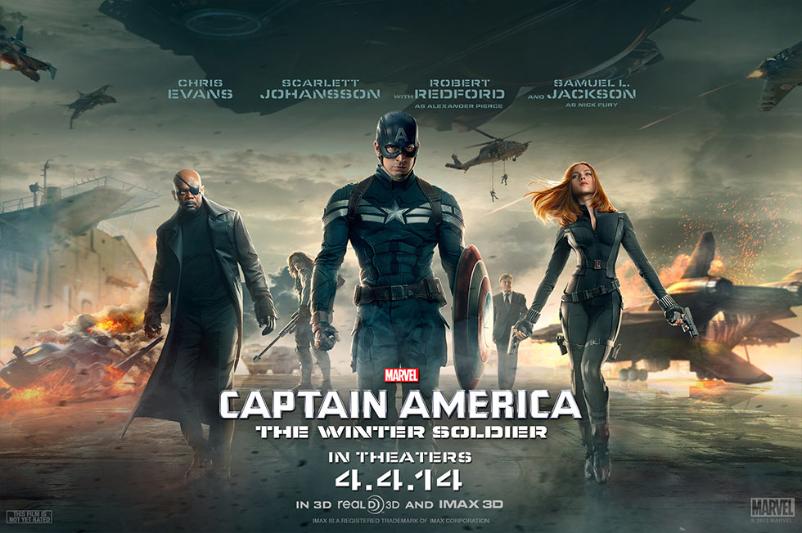 Captain America; The Winter Soldier is the eighth film in the continuing Marvel story. The first phase came to a spectacular climax with Avengers Assembly.

Now Marvel are into the second phase of films that will eventually lead to the next Avengers film.

The first part of phase two, Thor: The Dark World was, in comparison to what had gone before, pretty poor. The next part of the Avengers jigsaw is Captain America: The Winter Soldier. A film that Marvel Studios president and producer Kevin Feige describes as a 1970s-style conspiracy thriller. After watching it I couldn't agree more as it's is closer to Jason Bourne than Iron Man or Thor. In the place of aliens or the occult we now have conspiracy, espionage, bluffs and double bluffs.

The first outing "The First Avenger" in 2011 saw Captain America (Chris Evans), our star spangled hero save New York from the evils of the Nazis and Hydra. He then, after being frozen in time, ended up in the present day where he joined Iron Man, The Hulk and others in The Avengers Assembly.

Two years after the events of The Avengers, Steve Rogers is now doing cloak and dagger missions such as hostage rescue for Nick Fury’s (Samuel L Jackson) agents of S.H.I.E.LD. However after a very personal attack on S.H.I.E.L.D., Captain America allies himself with Natasha Romanoff/Black Widow (Scarlett Johansson) to face down the mysterious Winter Soldier. He then rapidly comes to realises that he can trust no one, even Nick Fury is suspected of becoming a traitor. In response to the threat of the now renegade S.H.I.E.L.D and Captain America the World Security Council’s leader Alexander Pierce (Robert Redford) activates a plan that will allow him to take control of the world.

Whereas all the previous Marvel films have been out and out superheroes films The Winter Soldier feels like an entirely different beast. In the past where we had destruction and battles on a grand scale we now have a more intimate paranoia-soaked political thriller. That's not to say that Winter Soldier doesn't have excellent actions scenes as it does, it just feels different. The plot is more complex and there's more use of the other supporting characters. The one downside to this is that it does sometimes feel as if Captain America is being pushed out of his own film.

There's much to enjoy in "Captain America; The Winter Soldier" and the change in tone and pace certainly opens it up for a wider audience. One thing is important, if you do decide to go and see it, as become the custom with Marvel films, make sure that you don't leave your seat until the credits end or you'll miss an important plot thread for the next instalment.