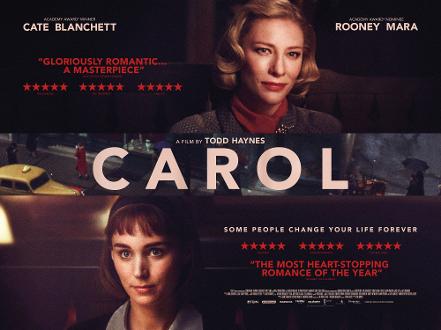 Based on the novel The Price of Salt by Patricia Highsmith, Carol is the story of the relationship between a young department store clerk and an older, unhappily married, soon to be divorced, woman.

Pretty much top of my must see list since it played at Cannes and another return to the era that director Todd Haynes has already impressively captured with Far From Heaven and Mildred Pierce, Carol is a sumptuous and deeply satisfying film from one of American cinema's finest directors.

Beautifully shot by Haynes regular DoP Edward Lachman it brings the 50s to life in precise and glorious detail. All set to a glorious Carter Burwell score.

Thankfully it's a film that is not only visually splendid but emotionally involving too. Much of that is due to two outstanding performances from Cate Blanchett and Rooney Mara with undeniable chemistry that makes their relationship as convincing as it is inevitable. Blanchett delivers a less obvious and more subtle turn in the title role than the award-winning one she gave in Blue Jasmine but this feels like a much more accomplished performance. Though Mara is just as compelling as the naive and vulnerable Therese.
Excellent support also from Kyle Chandler and Sarah Paulson as Carol's husband and best friend. As a Sleater-Kinney fan I was also thrilled by an, all too brief, appearance from Carrie Brownstein.

The kind of film likely to feature heavily come awards season (watch it hoover up those production & set design, costumes and hair & make up awards), Carol deserves all the attention it's likely to get. An extraordinarily beautiful piece of filmmaking.

Also interesting to see this around the same time that Brief Encounter is rereleased. In an obvious homage to the 1945 film Carol opens in a similar fashion. Two lovers in the middle of an emotional encounter are interrupted by an acquaintance of one of them, who remains oblivious to the relationship before them. The film then goes back to detail the events leading up to that moment. Luckily Carol doesn't suffer at all in comparison to that David Lean classic.