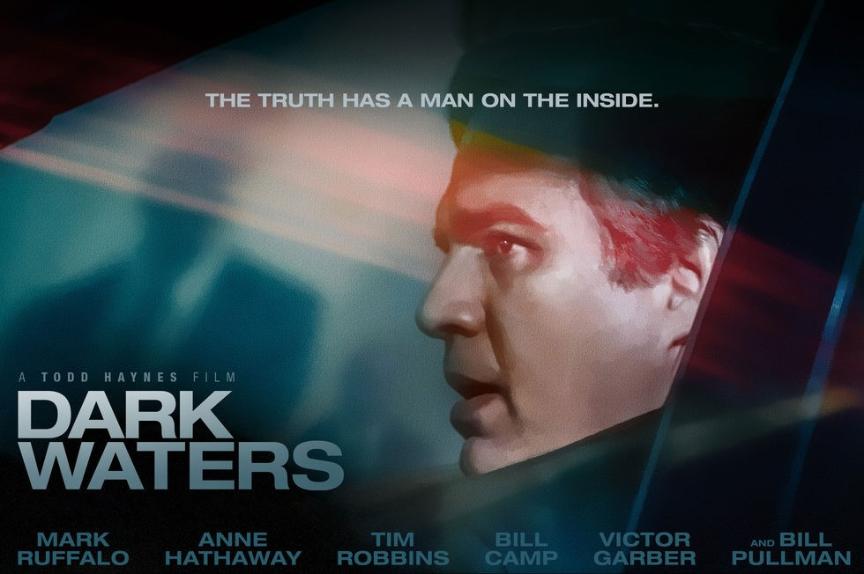 Fact is sometimes scarier than fiction and so it proves with the engrossing and somewhat disturbing “Dark Waters”.

Mark Ruffalo plays Rob Bilott an attorney working in Cincinnati Ohio for a law firm that specialises in representing chemical companies. Married to a former lawyer (an underused Anne Hathaway) Bilott was happy in his job until something happened in 1988 that sparked his conscience.

One day a farmer (Bill Camp), who stays beside Bilotts mother in Parkersburg, West Virginia, turns up at his office claiming that his cattle are being poisoned and killed by toxic chemical waste that’s coming from the nearby DuPont chemical factory.

At first reluctant to take up the case he heads to the farm and, after finding that over 200 cattle have died and the poison has possibly been ingested by the local population through the water supply, he takes up the farmers case.

Taking on the case Rob finds that, as well as fighting DuPont, he has also to fight his fellow lawyers and his boss (Tim Robbins) who are all reluctant to take on the very companies that pay their wages.

What follows is a gripping story of one ordinary person’s fight against the might of corporate America.

I won’t give too much away for fear of spoiling the story but just let me say that you won’t look at your pots and pans in the same way again.

“Darks Waters” is a compelling and frightening movie and one that deserves to be seen.