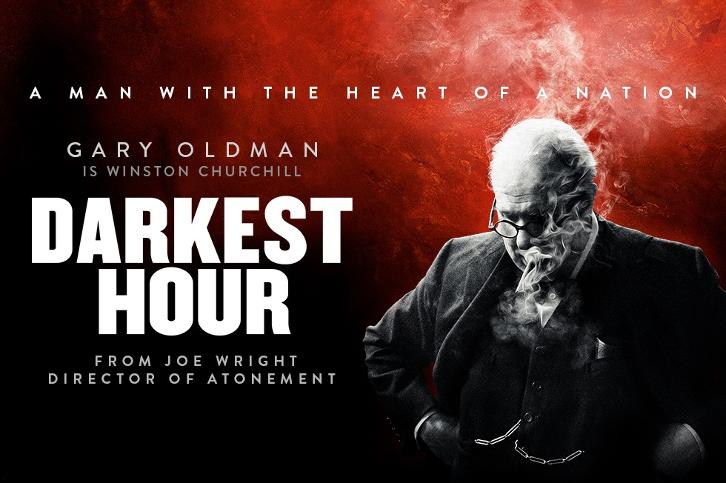 At the end of May 1940, with the British Army trapped on the beaches of Dunkirk, there was a very real possibility that within days Nazi Stormtroopers could be walking through the streets of London. With the government in turmoil Churchill is elected Prime Minister and on his shoulders rests not only the evacuation of 300,000 British troops from the beaches of Dunkirk but also the galvanisation of the British public against the expected onslaught of the German forces.

Based on a script by Anthony McCann, who received an Oscar nomination for The Theory of Everything, Darkest Hour is lifted above what could have being a routine Churchill biopic by an outstanding performance by Gary Oldman. Buried under a mountain of latex and prosthetic makeup Oldman is almost unrecognisable as Churchill. Ably supported by Kristen Scott Thomas as his devoted and long-suffering wife, Clementine, Oldman is a revelation in the role. Recently nominated for a BAFTA award for best actor, you wouldn’t bet against him actually winning the award and also making it a clean sweep with an OSCAR win.

The speeches from the great man are all there, but as well as the personal face of Churchill that we have all come to know via various films and television programs, director Joe Wright shows Churchill to be a man, who as well as being the savour of the nation is a person who is haunted by his own inner demons. Churchill drinks too much, he’s haunted by his own failures of the past and as time goes on he starts to doubt if he is the person who can save a possibly doomed nation. The scene that touches the most, and one that’s most probably been added for dramatic effect, is when Churchill, who by this point is staring defeat not only by the Germans but of Parliament, ventures alone onto the London tube in order to gauge the feeling of the common man.

Darkest Hour might not bring anything new to what we already know about Churchill, but as a masterclass in acting Oldman’s performance shouldn’t be missed.