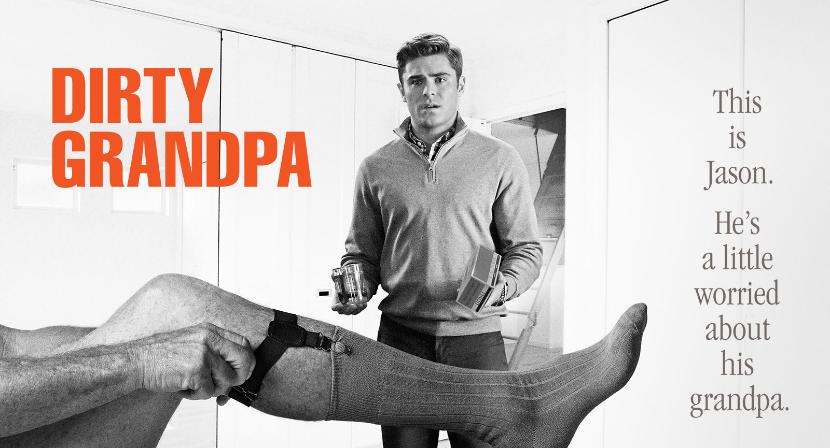 Jason Kelly (Zac Efron) is one week away from marrying his boss’s uber-controlling daughter, putting him on the fast track for a partnership at the law firm. However, when the straight-laced Jason is tricked into driving his foul-mouthed grandfather, Dick (Robert De Niro), to Daytona for spring break, his pending nuptials are suddenly in jeopardy. Between riotous frat parties, bar fights, and an epic night of karaoke, Dick is on a quest to live his life to the fullest and bring Jason along for the ride. Ultimately, on the wildest journey of their lives, “dirty” Grandpa and his uptight grandson discover they can learn from one another and form the bond they never had.

Robert De Niro's made some strange career choices over the last few years and his roles in such classic films such as The Godfather Part II and Heat now seem but a distant memory. The latest film in what can only be described as his, give me the money and I'll do anything phase, is the cringe worthy Dirty Grandpa.

De Niro, unsurprisingly given the nature of the bad taste jokes that are on display, plays Dick, an elderly recently widowed man that decides to take his straight laced grandson Jason (Zac Efron) to Florida so that he can show him how to live life to the full before he gets married to his controlling fiancée. As the pair set out on their road trip the jokes become cruder and cruder as Grandfather and Grandson indulge in sex and drugs.

If you can stomach the sight of Dick being caught whilst in the middle of a number three (see the film and you'll know what I'm talking about) and find jokes about dicks, breasts and bums funny then there is a strong likelihood that you might find Dirty Grandpa enjoyable. For everyone else I would suggest that you give this one a miss.