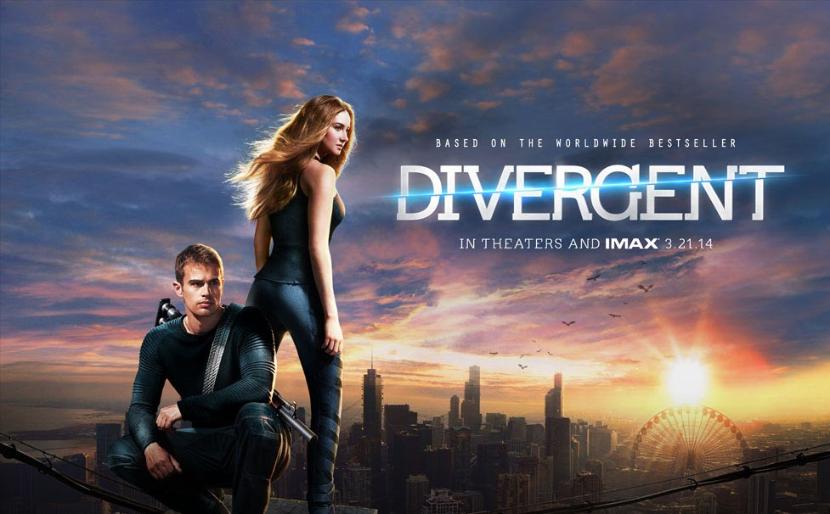 Divergent adapted from Veronica Roths bestselling novel aims to be the next Hunger Games. As in the Hunger Games Divergent is set in an Orwellyn future where young people are manipulated by adults.

Sometime in the future after war has ravaged the planet Beatrice (Shailene Woodley) a 16-year-old girl is living in a closed wall Chicago. It's a place where citizens are split up into one of five different fractions. There’s Amity, whose people farm the land. There’s Abnegation, who think only of others and work in government. There’s Candor, who tell the truth. There’s Erudite, who like to show off their vocabulary. Finally, there’s Dauntless, the military arm.

When children turn 16, they take an aptitude test that tells them who they should be. Beatrice's family are from Abnegation, but when she takes her test, the results say she doesn’t fit into any of the fractions. She’s what’s known as "divergent," a person that doesn't slot into society and through their free mindedness are seen as a threat to society itself. Her tester (Maggie Q) hurries her out of the building, explaining that she must keep this information secret as terrible consequences will befall her should others find out her secret.

When choosing day arrives rather than choosing her family's Abnegation faction Beatrice defects to the military Dauntless faction. A fraction who for a military group seem somewhat rebellious, they spend their time riding and jumping from trains that only seem to exist to allow them to do these very things. Once in Dauntless Beatrice for some inexplicable reason changes her name to Tris. What follows is much like the Hungers Game training sessions as Tris goes through various initiation rituals that are organised by Number 4 (Theo James) and the evil Eric (Jai Courtney). As time goes on Tris slowly starts to piece together why being outed as Divergent could prove so perilous and who she can trust.

Unfortunately Divergent much as it try's is no Hunger Games and Woodley is no Jennifer Lawrence. That's not to say Divergent is bad it's certainly not. Woodley is good in the lead role and once you can get your head round the convoluted story line it does grow on you. The film feels very much like a set up for what's to follow (there are another two books in the series). Here's hoping that the film does well enough at the box office to allow Tris's story to continue. There's enough in this first outing to indicate that it might be worth sticking with Divergent for the long run.