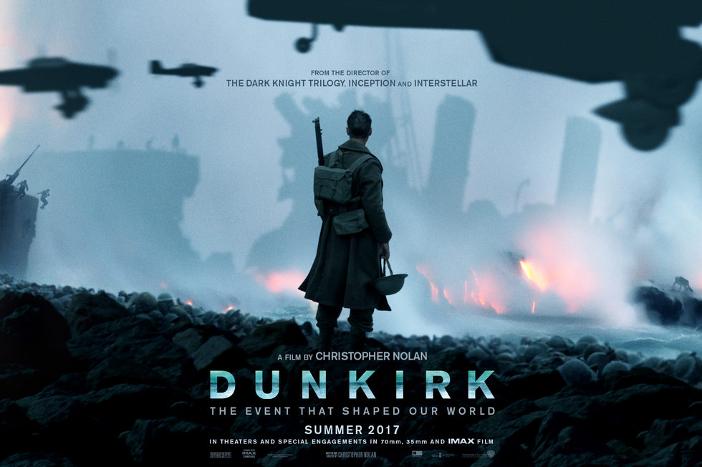 With Dunkirk, Christopher Nolan delivers a masterclass in suspense with this tense and relentless depiction of Operation Dynamo and the attempts to rescue 400,000 men from the beach and harbour of the French port.

Omitting the usual scenes of generals in wood-panelled rooms pushing pieces around a military map with long sticks, Dunkirk instead focuses solely on the men directly involved in the evacuation. Depicting events through the experiences of the soldiers waiting on the beach, the Spitfire pilots fighting in the skies above and the civilian ships making their way towards them. It's a bold way to tell the story and is initially a little confusing as they each take place at a different time but this becomes more intriguing as they start to overlap.

From the opening scene of British soldiers under fire from the enemy on the almost deserted streets of Dunkirk, the film barely pauses for breath as one tense set piece follows another. Dialogue is also kept to a minimum, which spares the audience from the usual clunky exposition that tends to typify films like this. Nolan's decision to simplify and rein in his tendency for indulgent running times makes this not only his shortest film in a while but also his most rewarding.

Technically it's also outstanding with some of the most immersive aerial photography seen on the big screen in a while and Nolan's Interstellar director of photography, Hoyte Van Hoytema ensures it looks visually spectacular too.

A fantastic ensemble cast helps bring out the human element amid the chaos. Fionn Whitehead (in only his 2nd screen role after ITV drama Him), Mark Rylance, Tom Hardy, Aneurin Barnard, Kenneth Branagh, James D'Arcy, Jack Lowden, Tom Glynn-Carney, Barry Keoghan, Cillian Murphy and, yes, even Harry Styles are all excellent. Son of Rambow's Bill Milner makes a surprisingly brief appearance towards the end (perhaps more footage of him ended up on the cutting room floor), while fans of The Bill are in for a treat with a blink and you'll miss it appearance from Sgt Bob Cryer himself, Eric Richard.

A fine Hans Zimmer score and exceptional sound design ramps up the tension and what could have been yet another run of the mill war movie is transformed into something closer to an against the clock suspense thriller.

If I was to pick holes, Christopher Nolan's trademark muffled dialogue makes another appearance (it has Tom Hardy wearing a pilot's mask throughout so this isn't exactly surprising). This is a minor criticism however considering how little dialogue there is overall. Plus, as I mentioned earlier, some may find the fact that the three narrative strands take place at slightly different times a little confusing. Land takes place over a week, Sea over a day and Air over an hour. However this does become more intriguing later on as the strands overlap.

It probably goes without saying that you should see this on the biggest screen possible. I for one will be catching this again on IMAX 70mm.

A monumental achievement and a visceral and emotionally involving spectacle.