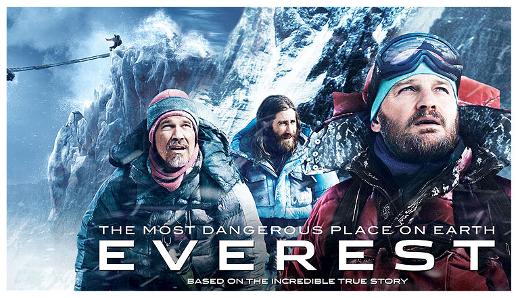 Based on true events, Everest tells the story of a group of climbers that attempted to climb to the summit of the world highest mountain in 1996. Sadly their efforts to reach the peak were to end in tragedy with nine of the climbers never coming back down the mountain alive.

The first half of the film, as is the way of all good disaster films, introduces us to the characters that will either live or die in the second half.

The one main weakness with Everest is that it's hard to feel sorry for the bunch of amateur thrill seekers who would seem to have had more money than sense, each having paid over $50000 to a tour company so that they could be led up the 29000ft mountain. Some of them have more experience of climbing than others and all of them have their own reasons for wanting to conquer the mountain.

Led by their professional guide (Jason Clarke), the amateur climbers are made up of people such as a retired postman (John Hawkes), a rich Texan (Josh Brolin) and a travel journalist (Michael Kelly).

After spending 40 days training at the base camp it's then off up the mountain for our bunch of foolhardy amateurs, but before they go, and because there are so many people on the slopes, they decide to team up with a rival tour group led by Jake Gyllenhaal's guide.

Meanwhile left behind at the base camp is base camp manager ( Emily Watson) and her assistant (Sam Worthington), their role as the drama unfolds above them is to keep the climbers loved ones up to date with the disaster that's engulfing their nearest and dearest. Keira Knightly and Robin Wright play two wives whose roles are solely to weep down the telephone when their told that their husbands are in trouble and might not make it back alive.

The second half of the film sees the climbers fighting for their lives as a storm engulfs the mountain.

The effects, especially in 3D, are truly spectacular as the group fight their way through blizzards, avalanches and everything else that nature can throw at them.

Everest, the film, is a story that's as much about the folly of man and how people can put others in danger by their own selfish short sightedness as it is about courage.