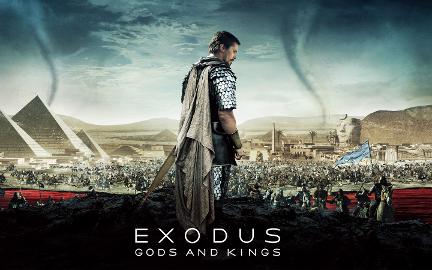 "Exodus Gods and Kings" is a pretty much by the book retelling of the story of Moses, directed by Ridley Scott (Gladiator) and starring Christian Bale as Moses, Exodus is great to look at but when broken down it doesn't stand up to much scrutiny.

If you don't attend church or have never seen Charlton Heston's definitive version of Moses in Cecil b Demille's "The 10 Commandments" then the story might be new to you, however if you are well up on the New Testament then Exodus won't hold many surprises.

Exodus starts, not with Moses being found on the banks of a The Nile as a child, but with him as an adult, he is the favourite son of Egyptian Pharaoh Seti (John Turturro, in one of many pieces of casting that is bizarre to say the least) and brother to the Pharaoh in waiting, Ramses (Joel Edgerton). When it's found out that Moses is a Hebrew Ramses casts him out into the desert. On his journey he hears the voice of God, the burning bush is here but it's not from the bush that Moses hears the voice of God but instead from a small boy who keeps appearing before him, God tells him to return to Egypt and free the Israelites from slavery. When Ramses refuses Moses demands, God sends a series of biblical plagues upon the people of Egypt.

The special effects are at times spectacular, plagues of locus sweep across the Egyptian landscape in their millions, the Nile turns red with blood, Exodus as you can gather can't be faulted visually, the faults start to show when Scott involves the actors, Edgerton as Ramses never seems comfortable in the role and Ben Kingsley and Sigourney Weaver appear in blink and you'll miss them parts.

Exodus is certainly better than last year’s Biblical epic "Noah" and worth catching if you enjoy big budget spectaculars.