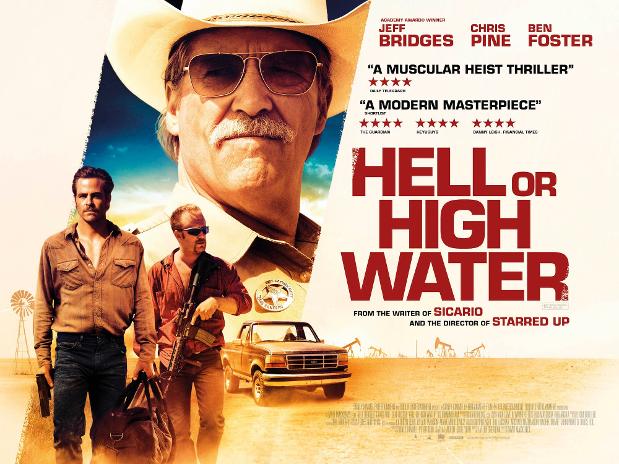 A story about the collision of the Old and New West, two brothers—Toby (Chris Pine), a straight-living, divorced father trying to make a better life for his son; and Tanner (Ben Foster), a short-tempered ex-con with a loose trigger finger—come together to rob branch after branch of the bank that is foreclosing on their family land. The hold-ups are part of a last-ditch scheme to take back a future that powerful forces beyond their control have stolen from under their feet. Vengeance seems to be theirs until they find themselves in the crosshairs of a relentless, foul-mouthed Texas Ranger (Jeff Bridges) looking for one last triumph on the eve of his retirement. As the brothers plot a final bank heist to complete their plan, a showdown looms at the crossroads where the last honest law man and a pair of brothers with nothing to live for except family collide.

Hell Or High Water is a riveting view from the first minute to the last, playing like an old fashioned western, complete with town’s people getting together a posse to chase banks robbers across the state. Scottish director, David Mackenzie’s film is a breath of fresh air in a summer that’s been filled with a relentless tide of disappointing blockbusters.

The story is simple, two brothers (Chris Pine and Ben Foster) need to raise $43,000 by the end of the week in order to stop the Texas Midland Bank from foreclosing on their late mother’s ranch.

The brothers feel that the bank have been less than honest with their dead mother and decide to get their own back by robbing the bank and paying their mothers mortgage off with the banks own money.

As the pair move from town to town robbing the banks, they are pursued by grizzled Sheriff Marcus Hamilton (Jeff Bridges) and his Native American partner Alberto Parker (Gil Birmingham).

Some might say that Bridges performance is a carbon copy of his Rooster Cogburn character, who he played in the remake of True Grit. However that shouldn’t detract from what is a fantastic performance.

MacKenzies film might be a modern thriller, however at its heart it’s a homage to the western and without doubt one of the films of the year so far.