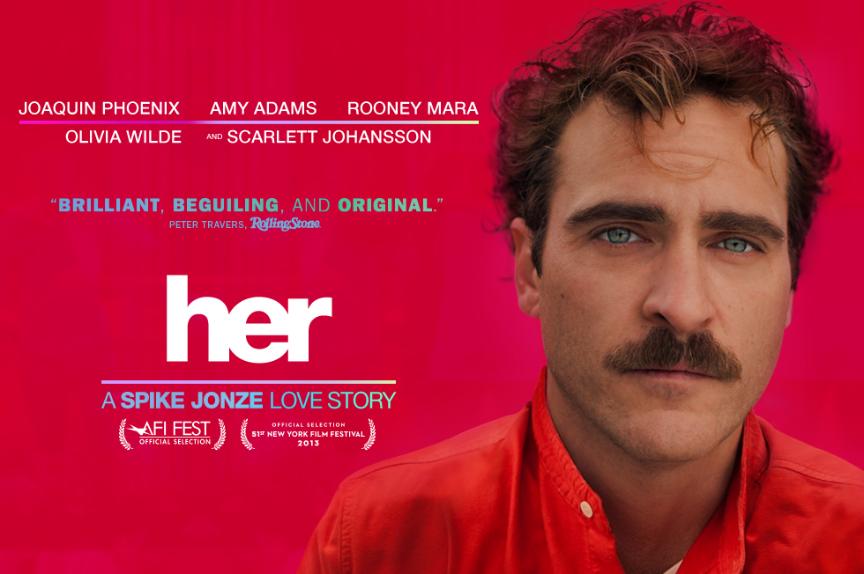 Sometime in the future, where and when we never find out, we meet Theodore Twombly. (Joaquin Pheonix) A sad lonely ex writer who now uses his skills writing letters for an internet company called BeatifulHandwrittenLetters.com. His letters are poetic and heartfelt but are obviously for people who have lost the ability to pen a letter themselves. Recently separated from his wife he has very few friends other than work colleagues and his neighbours Amy and her husband Charles (Amy Adams and Matt Letscher). Theodore spends most of his time, as does nearly everyone around him, with an earpiece in communicating with his mobile phone. The voice that we hear in his ear is cold and most definitely male. Drifting through life with no focus Theodore decides to buy himself a new computer.

When it arrives it comes with its own unique artificially intelligent operating system that calls itself Samantha (Scarlett Johansson). Even although he is a living breathing sole and she is only a voice that comes from a computer, they build a relationship that eventually deepens into true romance. They go out on double dates where Theodore's friends interact with her as if she was actually there and not just a voice coming from a speaker. They go to the beach together and even have "phone" sex. She watches him fall asleep at night and he likes it when they spoon in bed.

In this world Theodore isn't alone in his behaviour. Amy tells him that she knows other people who are dating their operating system. This just encourages Theodore and he is drawn further and further into himself and into his relationship with Samantha.

Pheonix in the role of Theodore is nothing short of brilliant and it's probably his best performance since his Oscar nominated role in 2005's "Walk The Line". In most scenes he has nothing more than an earpiece to interact with but somehow he manages to draw you totally and completely into Theodore's world. You feel for the man, from his initial loneliness to his new found happiness as he finds love with Samantha. This is a man who sees no wrong in what he's doing.

"Her" is a thoughtful, mesmerising look at one lonely man's inability to connect with real people and how society not only makes it happen but encourages it.

Is writer/director Spike Jonze making a black comedy about the future or is it a satire of life today. As I sit here hunched over my computer writing this review and my wife talks to someone on her mobile phone, it's a very good question indeed.

"Her" is a touching and thought provoking film that we should all see. It just might make us think twice the next time we put an earpiece in our ear and look at our mobile phone.

www.herthemovie.com
Her - "The Moon Song" Trailer
Her - Behind The Scenes Featurette