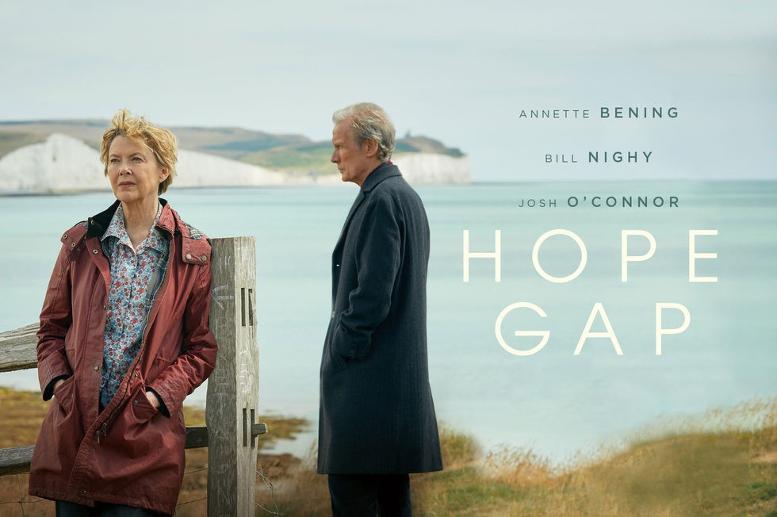 Hope Gap, named after a bay on the Kent coast, is based on writer/director William Nicholson’s own 1999 play called The Retreat To Moscow.

The story about a couple going through a marriage crisis after 29 years together never really escapes its stage origins and feels very much like the play that it’s based on. Other than a few scenes set on the Kent coast most of the film involves conversations over a table whilst the protagonists’ drink tea and eat toast.

Annette Benning plays Grace a woman with a fiery temperament which unfortunately is the polar opposite of her husband, Edward’s (Bill Nighy) laid back attitude to life. Grace is driven to distraction by his refusal to engage in her arguments and everything comes to a head on weekend when their son is visiting (Josh O’Connor) and after one of their many one sided arguments Grace slaps him on the face and in a temper trashes the kitchen.

The following morning Edward confesses to his son that he’s in love with another woman and that he’s planning to leave his mother.

After he leaves Grace goes through various stages of emotions raging from anger, she even buys a puppy and calls it Edward out of spite, to feeling suicidal.

The big issue with Hope Gap is that Grace, and I presume that we’re meant to have some empathy with her, is not a particularly likable person, she’s a bully and doesn’t come across as someone that you would particularly want to spend any time in the company of, even her son only reluctantly visits at the weekend. Saying that all the fault can’t be placed on the shoulders of Grace as Bill Nighy gives his usual deadpan performance making you wish you could give him a shake out of his lethargy.

All in all Hope Gap feels like an old fashioned British kitchen sink drama and a not particularly good one at that.