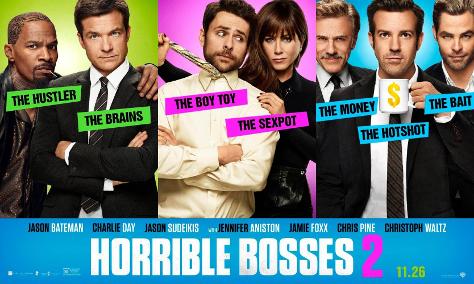 The Horrible Bosses are back in a sequel to the 2011 smash, well I say back as the actual Horrible Bosses, Jennifer Aniston and Kevin Spacey, make no more than what can only be described as a cameo appearance. The story this time finds our three "employees ", Nick Hendricks (Jason Bateman), Kurt Buckman (Jason Sudeikis) and Dale Arbus (Charlie Day) now being their own bosses. The three of them have invented a device that dispenses soap, shampoo and conditioner from a single shower head, they've called their "wonder invention", the shower buddy.

After unsuccessfully trying to market the product on day time TV, where they realise that the name that they've given their company is nothing short of racist, the trio decide that they need a wealthy investor to help them manufacture and distribute their product.

On the back of their disastrous TV appearance their approached by the arrogant Bert Hanson (Christoph Waltz) and his equally obnoxious and arrogant son Rex (Chris Pine, who is a standout in an excellent cast). Hanson offers to buy thousands of shower buddy's for $3 million and gives them advice about going to a bank and borrowing money that will allow them to manufacture the thousands of shower buddy's that he has ordered. The hapless trio have no sooner accepted the deal when Hanson pulls out, telling the trio, who turn up on a golf course with balloons and a cake to celebrate their deal , "when your company goes bust I'll buy the product at a third of the price."

Left with thousands of shower buddy's that they can't sell and a large bank loan that they can't pay back, the trio concoct a plan to kidnap Rex and ransom him for $500 000. They then turn to Dean "MF" Jones (a hilarious Jamie Foxx) for advice on how to best kidnap Rex. The plan that they come up with involves stealing some laughing gas from Dr Julia Harris's (Jennifer Aniston) dental surgery, unfortunately, in one of the films standout scenes, the trio turn up at her surgery when she is in the middle of a therapy session involving a number of recovering sex addicts.

Needlessly to say the kidnapping doesn't exactly go to plan and the trio are forced to turn to the one man they think can help them, Dave Harken (Kevin Spacey). Harken is now in a high security prison and barks insults at them from behind a glass security screen as they ask him for advice.

"Horrible Bosses 2" is great fun from start to finish, with a wonderful cast, plenty of laughs, action and excitement, fans of the first film, and new comers to the series, won't be disappointment, highly recommended.