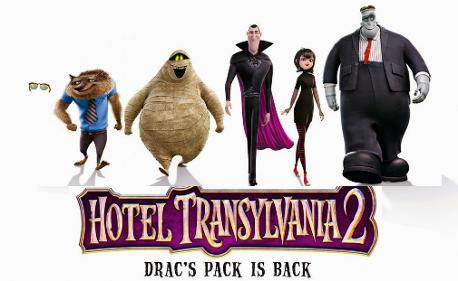 Hotel Transylvania was a massive success in 2012 and a sequel was always on the cards.

It's now three years later and Dracula (Adam Sandler) is still running his hotel for monsters. His daughter (voiced by Selma Gomez) has now had a child to her human husband (Andy Samberg) and it's coming up to the child's third birthday. Monster tradition dictates that by the child's third birthday he will either be fully human or will have developed fangs and become a bloodsucking vampire. Much to Dracula's concern there is only a few days to go until the child's birthday and there's still no signs of any fangs. Worried that his grandson his going to become a human Dracula comes up with a plan to scare the fangs out of his grandson. Dracula and his buddies, the mummy, the werewolf etc, then take the boy out into the forest in order to try and turn him into a vampire. Unfortunately Dracula's daughter would rather her son became human and she has headed off to California with her nerdy husband to look for a new home she doesn't want her son to be brought up in a hotel for monsters. Dracula then has a race against time before his daughter finds out what he's up to behind her back.

Hotel Transylvania 2 is pretty much a rehash of the first film but if you enjoyed Drac's first outing then there's no reason why you shouldn't find something to amuse you here. The animation is top notch as is the 3D, Hotel Transylvania 2 might not be a classic but it has enough laughs to keep children, and adults that have been dragged along with them, amused for 90 minutes.