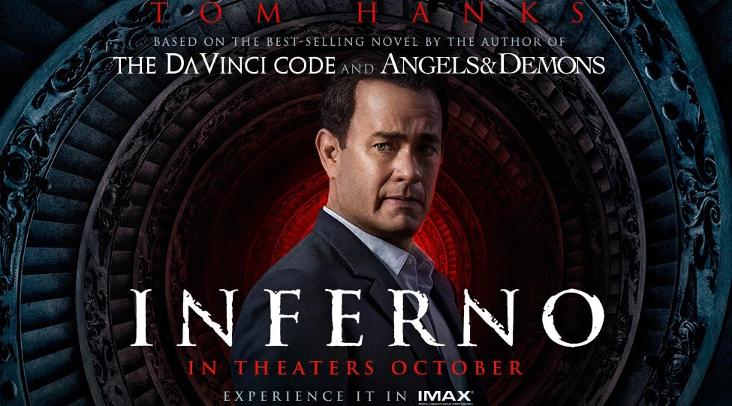 Tom Hanks returns for the third time as Harvard University professor Dr Robert Langdon. Based on Dan Brown’s novel, Inferno is a follow up to The Da Vinci Code and its 2009 sequel, Angels and Demon’s.

The third outing for Langdon sees him waking up in a Florence Hospital bed suffering from amnesia and terrible visions of hell. The only thing that he’s sure of is Doctor Sienna Brooks (Felicity Jones) who is helping him recover.

When bad guys turn up at the hospital and try and bump Langdon off the pair end up on the run from both the law and the heavies. In a first for a movie it appears that the World Health Organisation are trying to finish the assassination job that they started before Langdon ended up in the hospital.

To make matters worse an eccentric billionaire, Bertrand Zobrist (Ben Foster), when confronted by members of The World Health Organisation has thrown himself off an ancient bell tower. However before his fall it appears that the evil billionaire has manufactured a plague-virus that when released will kill half of the human race.

Langdon and Brooks must then run, and I mean run as Langdon and Brooks spend most of the film running, or should I say jogging, which is more appropriate for an ageing Hanks, between various European cities trying to work out from clues that they find where Zobrist has hidden the virus.

How director Ron Howard manages to make a film that jumps all over the European continent so slow is a skill in itself. The plot is so pedestrian it’s hard to keep an interest in the absurd plot.

Hanks is a wonderful actor who very rarely puts a foot wrong when it comes to picking roles, the upcoming Sully is testimony to that, unfortunately Inferno is a stinker that not even his presence can save.