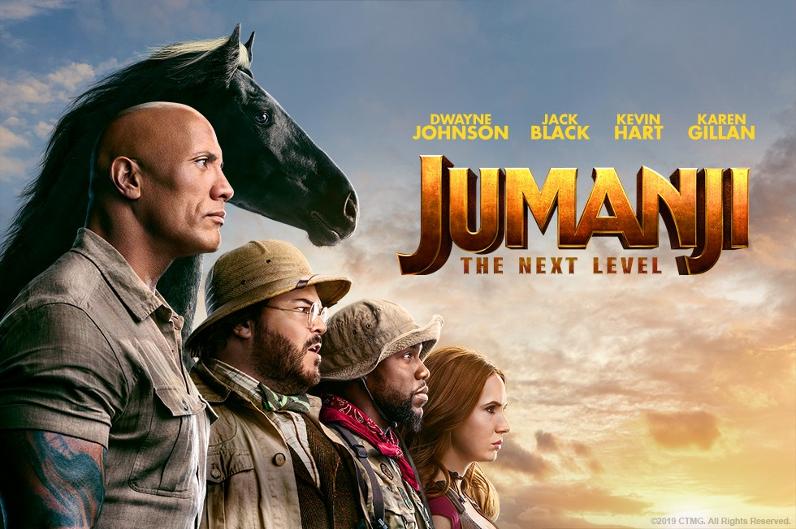 “If it isn’t broken, don’t fix it” might well be Jumanji: The Next Level director Jake Kasdan’s moto as he basically regurgitates events and characters from “Jumanji: Welcome to the Jungle”.

“Jumanji: The Next Level” is as much a remake of its predecessor as it is a sequel with only a few new characters added in an attempt to give it some freshness.

The story sees Spencer (Alex Wolff) struggling at college in New York City and longing for the excitement he felt in the Jumanji Game where he played Dr Bravestone. Returning home for the holidays Spencer is forced to share a room with his grandfather Eddie (Danny DeVito) who is recovering from surgery. Longing to continue his adventure in Jumanji, Spencer sorts the old video game console and subsequently disappears from the house. This leads to Fridge (Ser’Darius Blain), Martha (Morgan Turner) and Bethany (Madison Iseman) deciding to return to Jumanji to save him. Unfortunately the transfer doesn’t go as planned and Eddie and his onetime business partner, Milo (Danny Glover) also make the journey to Jumanji with Fridge and Martha. Bethany for some reason that is never fully explained fails to make the transfer and is left back in the real world.

Once in Jumanji with the exception of Martha who has returned once again as Ruby Roundhouse (Karen Gillan) all the rest end up in different bodies and as different avatars, Grandfather Eddie becomes Dr Smolder Bravestone (Dwayne Johnson), Milo is Franklin “Mouse” Finbar (Kevin Hart) and Fridge becomes Sheldon “Shelly” Oberon (Jack Black).

The objective that the team is given, which if completed successfully will allow them to return home, sees them having to retrieve the Falcon Jewel from a ruthless warlord called Jurgen the Brutal (Rory McCann). Along the way, as they complete various tasks, they also have the small matter of trying to find Spencer.

Director Jake Kasdan does attempt to freshen things up with some fantastic set pieces, the team have to escape hordes of mandrill apes that attack them as their trying to cross swing bridges, and some additional characters, Awkwafina turns up as Ming Fleetwood a new avatar who specialises in burglary, pick-pocketing and lock-picking, but on the whole “Jumanji: The Next Level” feels a bit like a reheated dinner, and your enjoyment will more than likely depend on how much you enjoyed the original meal.

If you enjoyed “Jumanji: Welcome to the Jungle” there’s no reason why you shouldn’t enjoy “The Next Level” however if you’re not a fan there’s nothing here that’s going to convert you.