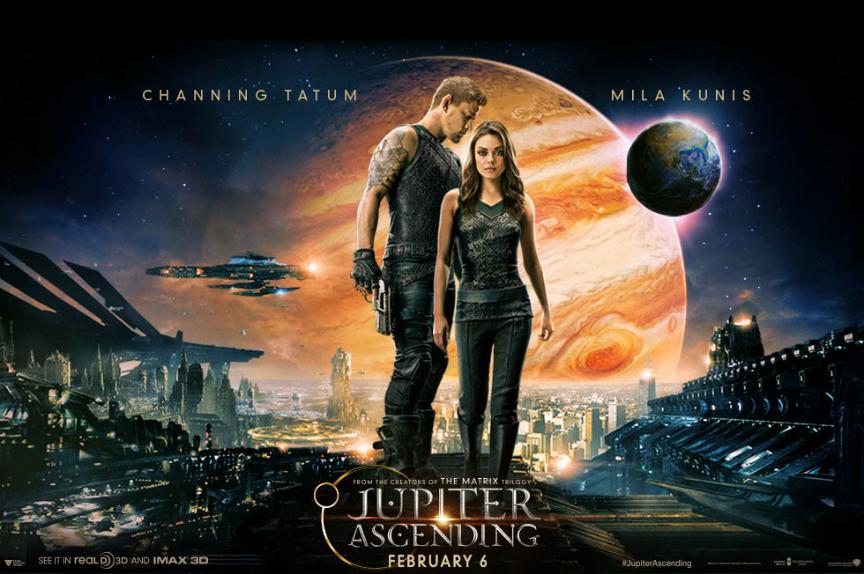 The Wachowskis brothers hit the big time in 1999 when they directed the highly successful "Matrix" film. Their last two films, "Cloud Atlas" and "Speed Racer" were flops at the box office. Now comes "Jupiter Ascending", a space opera with a budget close to $175 million, could this be the film to finally put the Wachowskis back at the top? The signs before it was released weren't great, originally due to open on July 25th, 2014, Warner Bros pushed the release date back more than six months giving the excuse that more time was needed to finish its ground breaking visual effects.

Sadly whilst the extra six months might have allowed them to tinker with the visuals, which are at times breath-taking, it's evident that very little time has been spent on the story. Rather than tinkering with the effects it might have been better devoting more time to the script as the story, and I'm being kind, is downright confusing.

It seems that somewhere in the outer reaches of space lives a family dynasty called the House of Abrasax, the family consists of three royal siblings, Balem (Eddie Redmayne). Kalique (Tuppence Middleton) and Titus (Douglas Booth). Lording over the universe each owns a large swathe of space and the planets within it. The planet that they covet the most just happens to be earth, the reason for this is because the occupants of the planet, that's us, are only kept there so that we can be farmed and our DNA extracted when we reach our genetic age. Human DNA apparently keeps the Abrasax's from growing old, according to Kalique Abrasax there's only one thing worth fighting for in the universe and that's time.

The one problem with their plan is that according to their law if the siblings’ mother is reborn then their whole inheritance becomes hers.

Whilst the three intergalactic royals are squabbling over their inheritance, down on earth, Jupiter Jones (Mila Kunis), an American-Russian cleaning lady, discovers, via various aliens, that she is the reincarnated head of the Abrasax dynasty and she is the true ruler and owner of planet earth. With the survival of the human race in her hands Jones is given her own protector in the shape of Caine Wise (Canning Tatum), Caine is a pointy eared Lycantant, a crossbreed between a wolf and a man who once had wings but they were cut off as punishment for some previous demeanour and he now has to make do with floating “surf boots” that allow him to glide through the air like Marty McFly on his hover-board from "Back to the Future".

As if the story line wasn't bonkers enough the acting at times, from various members of the cast, is even worse, Redmayne, so good in the recent "The Theory of Everything" plays his part like some bad pantomime villain, whispering most of his lines through gritted teeth. Redmayne seems to be in an entirely different film from everyone else, if there were a camp version of Darth Vader out there in the universe then the Wachowskis have managed to find him. Oh, and Sean Bean pops up to explain that bees aren't like humans in that they don't lie.

The one thing that does save the film from being a total disaster is its special effects, in 3D and in Imax the visuals are stunning, the problem is that the effects become rather wasted as the action scenes seem to go on and on and on with no reason other than to destroy as many buildings as possible. Go to the toilet or for some popcorn when an action scene starts and I can guarantee you that you'll have missed nothing of the story by the time that you return to your seats.

“Jupiter Ascending” might not be as bad as the likes of “Battlefield Earth”, another overblown space opera, however other than its special effects there's not a lot to recommend here.