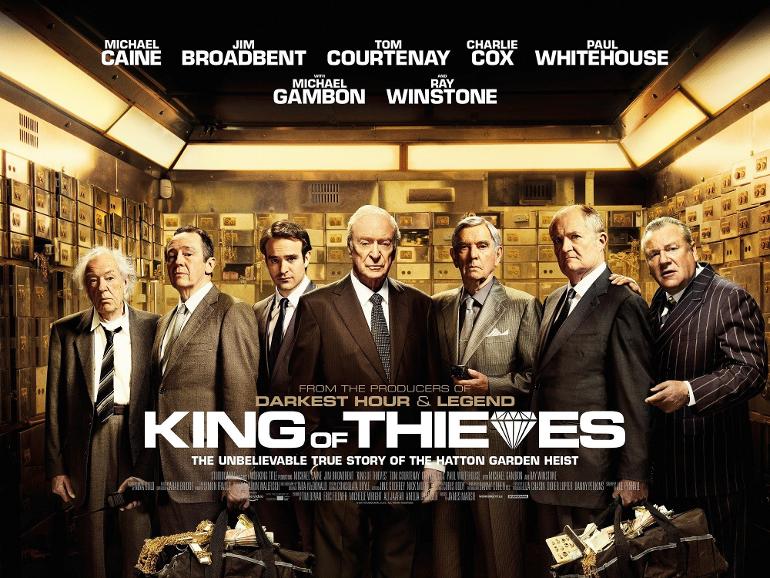 The victims – who are still are missing unrecovered millions in cash and diamonds - of the 2015 London, Hatton Garden jewellery robbery have been vocal in the media complaining that King of Thieves, which is based on the robbery, treats the whole issue with some joviality in that it makes the actual robbers look like a bunch of friendly old criminal grandpas’ who are out for one last hurrah.

They probably have an argument as, particularly in the first two thirds, King of Thieves comes across like an old Ealing comedy as the elderly robbers joke about their need to repeatedly go to the toilet and how their backs bother them. It’s not until the final third where the police enquiry gets into full swing that we get a fleeting glimpse of how really nasty the real perpetrators’ were.

However taken with a pinch of salt and purely as a piece of fictional entertainment there’s a lot to enjoy in director James Marsh’s movie. The cast reading like a who’s who of British cinema and includes Sir Michael Caine, Jim Broadbent Sir Tom Courtney and Ray Winstone is excellent.

Caine plays elderly career criminal Brian Reeder, who after the death of his wife, is approached by a computer wizard (Charlie Cox) who persuades him to lead a daring heist on London’s Hatton Garden Safe Deposit Ltd, which holds millions of pounds of diamonds, gold and cash in its underground vault.

Breaking his promise to his dead wife that he would stay out of trouble, Reeder then builds up a gang of elderly career criminals that includes Terry Perkins (Jim Broadbent), John Kenny Collins (Sir Tom Courtenay) and Danny Jones (Ray Winstone).

Over the Easter Weekend of 2015 when all the premises on the street are closed down for the holiday the team of criminals descend a lift shaft in an adjacent building and then use a heavy duty drill to bore into the vault next door.

King of Thieves is an enjoyable caper movie, just don’t take it too seriously.