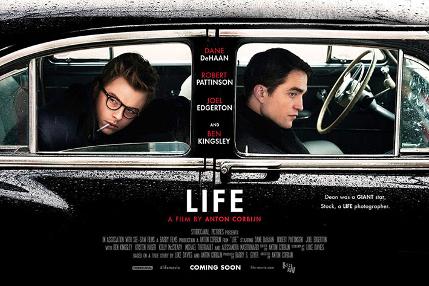 Life is a film telling the true events of actor James Dean's (Dane DeHaan) relationship with magnum agency photographer Denis Stock (Robert Pattinson). The pair, having met just before Deans first film, East of Eden, was due to be released in March 1955 were to go on and photograph some of the most iconic images of the 50's.

Dean at the time of their meeting was just in the cusp of stardom and was relatively unknown. However Stock could something in Dean's moody personality that would make him a star. Eager to capture Dean's smouldering quality on film, Stock badgered not only his employers but also Dean to allow him to do a photoshoot of the rising star for an article in Life Magazine.

Most of this slow moving film sees Stock following Dean about trying to convince him that he should allow him to photograph him. Stock's plan is not to shoot Dean in the normal way, they'll be no glitzy studio approved pictures, Stock's pictures will show a raw James Dean, Stocks pictures will show Dean as he lives his life, visits friends, gets a haircut, returns to his parents farm for a birthday. It's hard to see who is using who here as each have their own agenda, Stock, a run of the mill photographer, sees Dean as his one last chance at the big time whilst Dean, a reluctant recipient, sees Stock as a necessary evil in his quest for fame.

Da Haan and Pattinson are good as Dean and Stock, although the lethargy of the two characters does sometimes drag the film down to a snail’s pace.

It's hard to imagine where this film will pick up an audience as most of today's young cinema goers will have very little, if any knowledge of Dean.

Life, like Stock's pictures, is a snippet of a time that has now passed by, an interesting curiosity and nothing more.