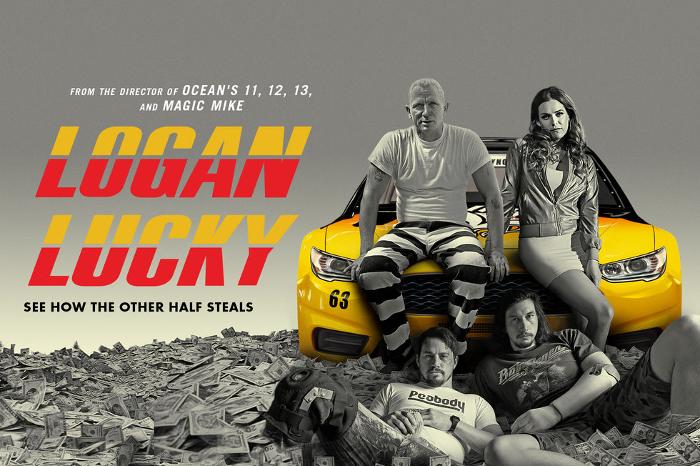 The story of two, supposedly cursed, West Virginian brothers (Channing Tatum and Adam Driver) teaming up with an incarcerated explosives expert (Daniel Craig) to rob the money vault at a Nascar race track is Soderbergh on playful and deliciously absurd form.

Working from a deft and funny debut script from the mysterious Rebecca Blunt (who many believe doesn't actually exist and could well be a pseudonym for either Soderbergh himself who has used one for his cinematography and editing on several occasions or perhaps his wife Julie Asner), Soderbergh has fashioned a film that withholds the full heist plans from the audience, occasionally dropping in initially confusing aspects of the plan (including painted cockroaches), before letting them click satisfyingly into place in the final third.

Tatum and Driver give likeably charming and not too dim performances as the Logan brothers, with Riley Keough building on the promise shown in American Honey and It Comes at Night as their sister Mellie. Meanwhile Daniel Craig steals the show as the larger than life explosives expert Joe Bang with a penchant for boiled eggs and a striking peroxide buzz cut. It's a performance that constantly threatens to trip up into full on ripe territory with a slightly ludicrous Southern accent but just about manages to stay the right side of grotesque caricature. Which is not quite the case with Seth MacFarlane as a British racing team owner, who seems to take Craig's performance as a personal challenge to come up with one that has an even more absurd accent and a crazier hairstyle (think Harry Enfield's Scouser with a jheri curl).

Better value are sons of famous acting dads, Brian Gleeson and Jack Quaid, as Joe Bang's younger brothers, who also show you can do broad caricature (dim-witted rednecks) without going too overboard. Katherine Waterstone and Sebastian Stan are slightly underused however as a former school acquaintance of Tatum and a health nut race car driver respectively. Though Dwight Yoakam has an amusing cameo as a prison governor obsessed with his prison's image and Hilary Swank and Macon Blair also make an effective appearance towards the end as FBI agents.

As purely entertaining a film you can find, Logan Lucky is an entertaining and funny comic thriller with an excellent ensemble cast that deserves better than the muted box office response it got on its US release. Hopefully it will get a more welcoming reception in the UK.