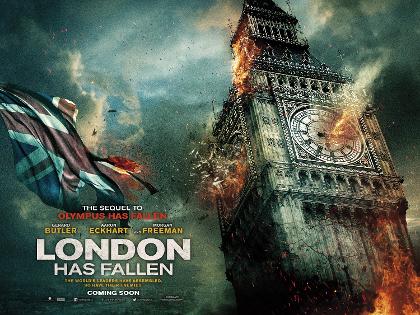 The sequel to the worldwide smash hit “Olympus Has Fallen,” a non-stop, suspenseful action thriller that delivers high-octane excitement through a heightened sense of authenticity. The visceral intensity springs from a timely premise: after the British Prime Minister passes away, his funeral becomes a target of a terrorist organization to destroy some of the world’s most powerful leaders, devastate the British capital, and unleash a terrifying vision of the future. The only hope of stopping it rests on the shoulders of the President of the United States (Aaron Eckhart) and his formidable Secret Service head (Gerard Butler), and an English MI-6 agent (Charlotte Riley) who rightly trusts no one. Morgan Freeman also stars as the Vice President of the United States.

Mike Banning (Gerard Butler) returns for a second time in order to save the President (Aaron Eckhart) of the United States from dastardly terrorists.

This time the President is in London attending the funeral of the British Prime Minister who has died suddenly.

The Prime Ministers sudden death sees over 40 world heads of state attending the hastily arranged funeral giving evil Islamic terrorists, led by arms dealer Aamir Barkawi (Alon Moni Aboutboul), who is out for revenge after an American drone attack in Pakistan killed his entire family, the opportunity to infiltrate the Metropolitan Police and Household Calvary, enabling them to launch a devastating attack that sees a large number of the world leaders killed and historical London landmarks blown to bits.

However the killing of the presidents of France, Italy and other countries is just a side issue as the real target for the terrorists is President Asher himself.

Most of the story of London Has Fallen sees Banning trying to plot his way across London so that he can get the president to a safe house. If the whole things not ludicrous enough it becomes even more when the British authorities sound the air raid sirens ordering everyone into their houses so that the only persons left in the streets are the terrorists, thus making it far easier for them to be identified and avoided by Banning.

Banning and the president, guided by Morgan Freeman's Vice President, who is again guiding operations from his bunker, then have to make their way through the streets of London killing terrorists as they go. The further they go the more numerous in numbers the terrorists become making London Has Fallen feel more like a film in the Rambo series.

How the terrorists manage to muster so many bad guys is never explained, Angela Bassett's, who is the head of the secret service, does ask the question at the beginning of the film but the questions is just glossed over and we move on to even more mayhem and killing.

London Is Burning is pure nonsense, however if you're a big fan of The Rambo films then this might be up your street.