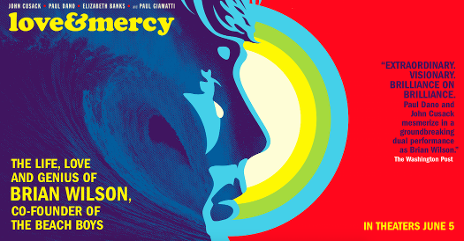 A compelling and slightly unconventional biopic that moves away from the usual A to B plotting of most films of this type by jumping between two distinct moments in the life of the troubled genius. So we have Paul Dano as the younger Brian, quitting touring to work obsessively on the challenging soundscapes of Pet Sounds while his mental state deteriorates and John Cusack as the older Brian, damaged and over-medicated by a controlling doctor who attempts to stifle his positive relationship with a younger woman.
Though this dual casting does take a little getting used to. Paul Dano is extraordinary and dominates the 60s set scenes though John Cusack's lack of physical resemblance to Wilson in the 80s era proves a little distracting at first (though admittedly preferable to having Dano in ageing make-up). Though you soon get used to it, he also feels occasionally like a support player in a film where Elizabeth Banks is the lead. Though she is very good, her more subtle performance contrasting quite nicely with Paul Giamatti's scenery chewing turn as Wilson's bewigged doctor.

The film is at it's best during the Pet Sounds sessions, with Dano brilliantly conveying the gifted musician who found a positive outlet for his obsessive perfectionism. There's something quite exhilarating about seeing and hearing a classic album slowly come together and certainly makes you want to revisit the original.
Of course the music as a whole is fantastic but extra kudos to Atticus Ross who takes on the daunting task of scoring the rest of the film. Though 'score' probably doesn't quite cover it as a description. It's more of a sound collage utilising different tracks by The Beach Boys to impressive effect.

Co-screenwriter Oren Moverman previously wrote the odd but fascinating Bob Dylan biopic I'm Not There, of which this is something of a spiritual cousin. It's not as arty or weird as that and director Bill Pohlad is no Todd Haynes but this is definitely a cut above most run of the mill music biopics.
It ends in a more conventional way with footage of the real Brian Wilson performing now. Though here the decision to do so, serves as a kind of triumphant resurgence for an artist who spent so long in the kinds of dark mental places few of us thankfully ever experience.