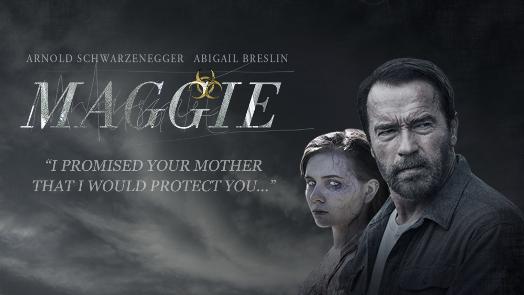 Pitch the words 'Arnold Schwarzenegger' and 'zombies' together and you'd be forgiven for expecting Arnie to dispatch countless hordes of the undead with a violent, bloody flourish and a bad pun.

What you probably wouldn't expect is a body count in the low single figures and Arnie crying after finding the declarations of love for a wife and daughter scratched into a bedroom wall by the zombified father that he has just killed (along with the daughter).

But that's exactly what you get in Maggie. A film that overturns expectations as to what both an Arnie film and a zombie film should be.

For a start the Z-word is never mentioned (it's a Necroambulist Virus outbreak) and the movie is more concerned with what happens when a father's daughter is bitten and how he should deal with it. Send her to quarantine and a painful death or care for her himself while trying to ignore the inevitable.

If this sounds unremittingly bleak and depressing, well it is. It's a slow paced but often moving tale that takes a horror genre staple and turns it into an emotional human story. An atypically long period from bite to full infection allows the filmmakers to really draw out this scenario for as long as possible.

It doesn't always work but it's an interesting variation on a well-worn story.

The cast is pretty strong. Schwarzenegger is fairly good, though the minimal dialogue and stoic character allows his limitations as a dramatic actor to not be too much of a hindrance as it might have otherwise been. Abigail Breslin is very good as the titular bitten teen, struggling to cope as the virus slowly takes over. While Joely Richardson is also fine as the wife and stepmother.