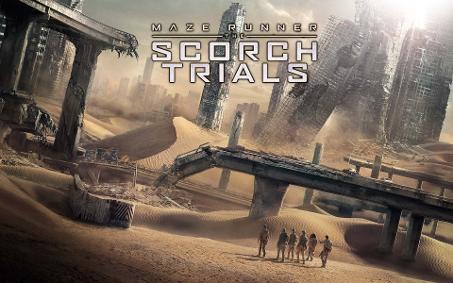 Following straight on from the events of The Maze Runner the second film in the trilogy The Scorch Trails sees Thomas (Dylan O'Brien) and the others that escaped the maze being taking into a secure facility. Whilst there they are told that they are now safe from Wicked, the evil corporation that placed them in the maze in the first place. However they soon find that the sanctuary is more of a prison and that the chief warden (Aidan Gillen) has them there for a reason, and it's not good.

The team then manage to escape from the facility, their intention being to reach the distant mountains where the resistance are meant to be hiding out. What follows as the young ones try and reach the safety of the mountains is basically a chase move as they are pursued across the scorched earth by the evil Wicked Corporation. However Wicked isn’t their only worries as the scorched earth is inhabited by zombie type creatures whose only goal is to devour human flesh.

If you're a fan of the first film, and I would suggest that watching The Maze Runner prior to going and seeing this instalment is essential, then you're in for a thrill. The story is full of twists and turns with the audience given just enough information to keep them wondering what's next in store for Thomas and his band of escapees.

This second outing, with its terrific use of 3d, certainly feels as if it's aimed more at an adult audience as the gore and the scare levels are ramped up considerably.

Maze Runner: The Scorch Trials (12A)