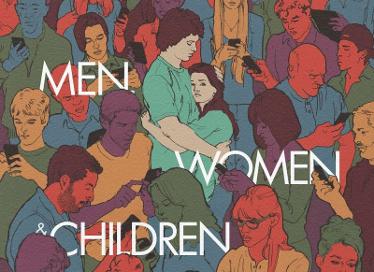 “Men, Woman and Children” the new movie from director Jason Reitman is an insightful and thought provoking look at how the internet and digital age has changed the way that we communicate with each other. Gone are conversations, it's now text messages and emails, even when we are in sight of one another.

Mum meanwhile is seeing Kent (Dean Harris), Dean is separated from his wife and has to look after his teenage son, Tim (Ansel Elgort). Tim, having quit the school football team now spends his days in front of his computer screen playing role playing games. The only person Tim has an interest in is Brandy, Brandy unlike most of the others in this tale has her head screwed on.Her only problem is that her mother Patricia (Jennifer Garner) is obsessed with keeping her daughter safe. Patricia spends all her spare time either tracing Brandy on her mobile or pouring over pages of text messages printed from her daughters mobile phone.

It all might sound a bit depressing for a night out at the movies, however “Men, Woman and Children” is terrific and it's not often that you can say that about a movie that Adam Sandlers in. It’s touching, moving and distressing, I say distressing because I'm sure that there will not be one person that goes to see this that won't see a little bit of themselves on the screen. This is a movie of today for today, don't miss.