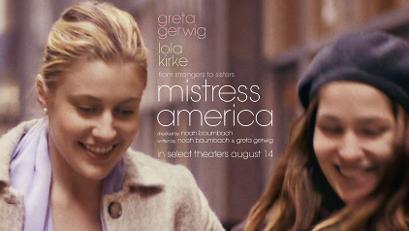 Mistress America is a comedy set in New York and starring Lola Kirke as 18 year old Tracy, an aspiring writer and university student who has just moved to the city. Not knowing anyone and just having been rejected for the college literary society and finding her boyfriend Tony (Matthew Shear) now hooked up with another woman she decides to call Brooke (Greta Gerwig), the 32-year-old daughter of the man that her mother’s about to marry.

When Tracy meets up with her soon to be step-sister the two of them immediately hit it off. Tracy quickly becomes smitten with Brooke, her lifestyle being the polar opposite of Tracy's, Brooke lives in a Times Square pad, sings in a band, has a number of business ventures on the go, one of them being a restaurant that she's hoping to open and above all she has loads of friends. The problem with Brooke is that she's a not very nice person, she is selfish, opinionated and forever talking herself up. The only person that can't see Brooke's faults is Tracy who hangs on Brooke’s every word. She even goes as far as writing down Brooke's life and turning it into a novelette that she submits to her college.

At the heart of Mistress America are two wonderful performances from its two lead actors, on the downside it's very talky with very little actually going on. Characters are limited to what seems like one line of dialogue before someone else takes over the conversation making the whole thing very hard to take in.

Great acting aside, there's very little to recommend in a film that ultimately thinks that it's smarter than it actually is.