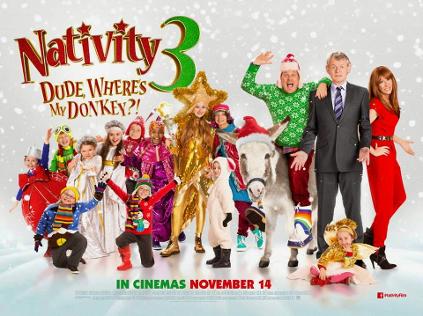 Despite nothing but bad reviews the Nativity films have become something of a Christmas hit. The first one in 2009 starred Martin Freeman and its sequel in 2012, which managed to take over £10 million pounds at the UK box office, starred former Doctor Who, David Tennant.

“Nativity 3” stars Martin Clunes as primary school teacher Mr Shepard. Whilst trying to remove Archie the donkey from the school Mr Shepard is kicked on the head by Archie causing him to forget all about Christmas and if that wasn’t bad enough he is also unable to recognise his daughter or fiancée Sophie (Catherine Tait) who he is due to marry soon in New York. But horror of horrors, as if forgetting your loved ones and Christmas wasn't bad enough Mr Shepard can't remember what he did with the donkey.

The pupils in the school along with child-like classroom assistant Mr Poppy (Marc Wootton, the ever present across the three films) then try and help him get his memory back. This involves trying to win a flash mob dancing competition that will win them a trip to New York, thus allowing Mr Shepard to marry Sophie.

“Nativity “3 is very much a children's film and 6 year olds will love it. There's plenty of catchy musical numbers and fart jokes to keep the average youngster amused. The kids in the film look as if they are having a great time and Clunes, looking like the character Where's Wally, plays a man with amnesia well. I say well but I'm not sure if the clueless expression on his face is him just showing his amazement at how he managed to get his agent to talk him into getting involved in this nonsense.

Director Debbie Isitt has been quoted as saying in reference to the film "That's what people want at Christmas Time" If she means embarrassing musical numbers, watch the scene with Celia Imrie rapping in a restaurant to see what I mean, bad acting, I'm talking about the concierge in the New York hotel with the worst American accent and false moustache ever seen on film and the kids being distracted by what's going on off camera, low production values which includes the dreadful CGI at the end of the film and the rolling English countryside outside the windows of the hotel that's meant to be slap bang in the middle of New York, then she might just be right.

The whole things plays like a bad school nativity play. If there is Christmas in Hell then this will be the film that's being shown on television on Christmas Day. Avoid unless you're 6 years of age or under.