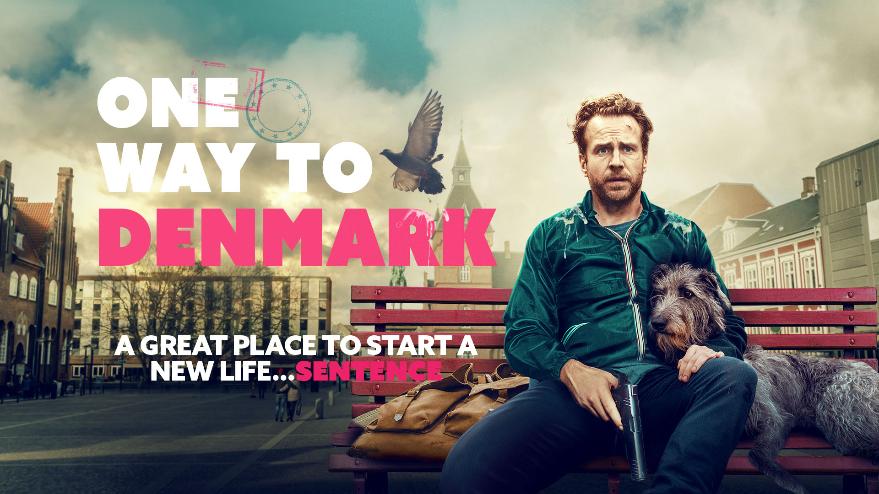 Unemployed, separated from his wife and son, living in a rundown Welsh town, suffering from depression, just having been refused social security for his bad back, called by his own mother “a pain in the arse tramp” and living in a house where the upstairs neighbour plays loud music 24 hours a day, life, oh I nearly forgot, and being mugged for his “new training shoes” that he just bought from the local charity shop, life is as Herb (Rafe Spall) himself describes, “shite”.

Understandably fed up with his lot Herb, whilst watching the TV, sees a documentary that describes how prison in Denmark is like living in a 5 star hotel. With its free TV, paid work and excellent food the cogs in Herbs brains start to work so loudly they virtually drown out his neighbour’s music.

Boyed by the idea of a better life Herb grabs a BB gun he has in a drawer, hitches a lift to the local dock and then stows himself away in a container that’s bound for Denmark.

Arriving in Denmark in the pouring rain, everywhere Herb goes it seems to rain, he concocts a plan to rob the local bank.

Prior to his criminal master plan he first makes his way to a local bar where just to add to his bitter mood, he’s forced by the locals to get up on stage and “sing like Tom Jones”. It’s here, after his first brush with the Danish public, that he meets bar worker Mathilda (Simone Lykke), a single mother who stays with her own argumentative mother (Benedikte Hansen).

To the audience things start to look up for Herb, befriended by Mathilda, her daughter and a stray Great Dane dog, surely things must get better for Herb. I won’t give anything away but following Herbs journey as he travels from his hopeless life in Wales to possible redemption in Denmark is a journey that’s as sad and emotional for the audience as it is for poor Herb.

The cast in One Way To Denmark (aka Denmark) are all terrific but special mention has to be made of Spall as it’s his performance that holds the film together. Onscreen for most of the films running time it’s to Spalls credit that by the end you really do care about poor Herb.

One Way To Denmark is a heart tugging tale of how life can throw up a little bit of sunshine even amongst the darkest gloom and comes highly recommended.