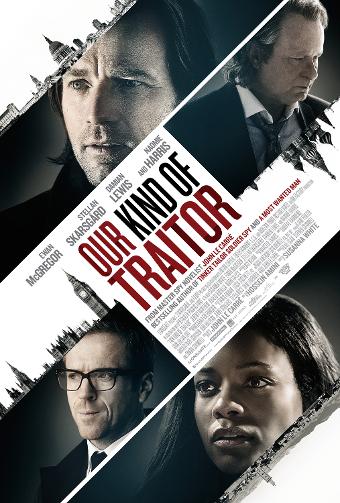 Based on a novel by John Le Carre, Our Kind Of Traitor sees university lecturer Perry Makepeace (Ewan Mc Gregor) and his girlfriend Gail (Naomie Harris), whilst on their holidays in Marrakesh having a chance encounter in a bar with Russian businessman Dima Krasnov (Stellan Skarsgard).

After they arrive back in London, Makepeace hands the flash drive over to British agents Hector Merideth (Damian Lewis) and Luke Weave (Khalid Abdalla). Once they check the drive they find that it contains evidence implicating MP Aubrey Longrigg (Jeremy Northam) in a money-laundering scheme that's being masterminded a Russian Mobster. The only problem is that Dima has only given them part of the evidence and he is holding the rest back as a bargaining toll.

When Merideth takes the information to his bosses he's told to back off and they refuse to sanction an operation against the Russians. Merideth, who just happens to have a grudge against the politician Aubrey Longrigg decides to take matters into his own hands and arranges an operation to get Dima and his family to the safety of the U.K.

Unfortunately the only persons that Dima will deal with is Perry and Gail, forcing them to become pawns in a game of cat and mouse as Merideth tries to get Dima to the UK so that he can unlock the full contents of the drive.

Our Kind of Traitor feels like a poor mans Alfred Hitchcock film, Ewan McGregor's do gooder character is straight out so many Hitchcock films, an innocent every man mixed up in a world that’s so far detached from his own. If this film was made in the 50's it would have starred James Stewart rather than Ewan Mc Gregor.

Saying that comparing this film to a Hitchcock film is a bit of an insult as Hitchcock would never have stood for the lazy storytelling that sees the plot becoming more ridiculous and implausible the longer that it goes on. A number of important plot twists leave you scratching your head and saying to yourself, that doesn't make any sense.

Our Kind Of Traitor starts so well but sadly runs out of steam and a plausible story long before it reaches its final conclusion.