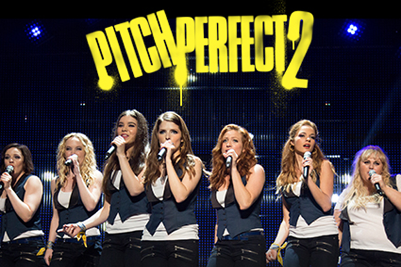 Pitch Perfect was a surprise hit when it was released in 2012 and when it took over $115M at the U.S. Box office a sequel was inevitable.

We re-join the all-girl Barden Bellas, for the uninitiated the Barden Bellas are an a cappella group who are in their final year of college. The girls are now the undisputed kings of a cappella but when Fat Amy (Rebel Wilson) has a wardrobe malfunction live on stage in front of President Obama the group find themselves suspended from all domestic competitions. Given one last chance the girls are told that if they want to redeem their reputation they must become the first American group to win a global competition. The Bellas’ then head to Copenhagen where they must beat their Germany rivals called Das Sound Machine.

Directed by Elizabeth Banks, who reprises her role as the sarcastic compare, Pitch Perfect 2 aims to bigger than the first one with all the characters, including Beca (Anna Kendrick) from the first making a comeback.

However being bigger doesn't necessarily mean being better. More time is given over to the other cast members this time. Kendrick, who was so outstanding in the first film, feels like she's playing second fiddle to Wilson. Beca's romance with her boyfriend Jesse (Skylar Astin) gets no more than a passing mention this time, whilst her quest to be a recording artist in her own right feels like it's been added on as an afterthought.

Fans of the first film and Rebel Wilson will no doubt lap this second helping up. If you’re not of fan of either then I'm afraid that this won't change your mind.