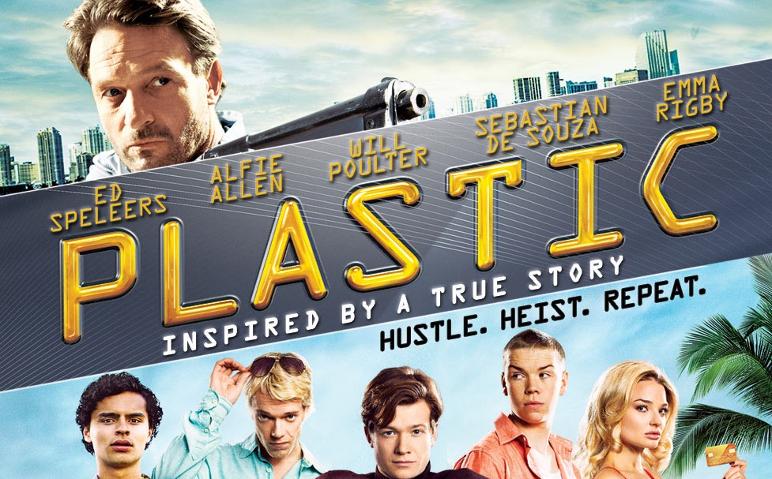 Allegedly based on a true story, Ed Speleers (Downtown Abbey), Will Poulter (We're The Millers), Alfie Allen (Game Of Thrones) and Sebastian De Souza (Skins) star as four students who, in order to fund their extravagant lifestyle, dabble in anything illegal that will make them money. This includes amongst other things, identity fraud, credit card fraud, blackmail and extortion.

Unfortunately during one of their scams they rip off an accountant for a Polish gangster (Thomas Kretschmann, Stalingrad), the group, in order to pay off their debts to him are forced into finding two million pounds worth of goods in two weeks. To raise the money they must move up a level and to do so they recruit Frankie (Emma Rigby from Hollyoaks) who just happens to work for a credit card company. It's then, with their stolen credit cards, that the not so famous five head to Miami so that they can scam some big hitters and raise the money that they need to save them from ending up in a shallow grave.

For a story that's meant to be based on true events the whole thing comes across as a bit tongue in cheek. When they get to Miami it's more like they have landed in Spain with the inbetweeners as it's off to strip joints and nightclubs. You wouldn't think that they were attempting to save their own lives as they have the time of their lives.

After they party hard they somehow realise that they have a task to be getting on with and set up a highly unlikely scam where they're going to pretend to an Arabian Prince and steal Diamonds worth twenty million dollars from a jeweller who thinks that he is supplying the said prince with jewellery for his upcoming wedding.

What follows is pure pantomime as the pack head back to London and undertake an Ocean's Eleven type heist. How anyone is fooled as they disguise themselves by blackening up their faces and putting on the worst false moustaches you can imagine, is beyond me. Also watch out for the worst shots with a gun in movie history.

Taken for what it is Plastic is an enjoyable piece of escapist fun pulled along by a likeable cast.

Plastic - "Card Declined" Clip
Plastic - "Everybody Has A Price" Clip