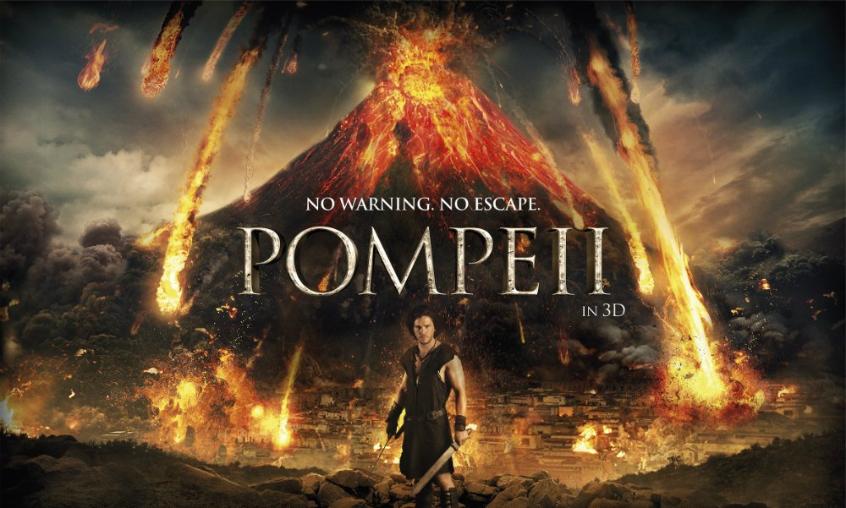 Review
Director Paul WS Anderson takes a break from the Resident Evil saga and gives us this paint by numbers sword and sandals 3D disaster epic. Take away the togas and it could be the 1997's disaster movies, Dante's Peak and Volcano, both of which had lava spewing mountains as their natural disasters.

Pompeii follows the tried and tested route for disaster movies in that it builds up the cast in the first two thirds only for them to face certain death from some impending disaster in the final third.

Among the cast that are fair game for the impending volcanic eruption is Games of Throne's Kit Harington. Harrington plays Milo, a Celt who we first see as a youth when he has been left for dead after Roman soldiers have murdered his family. Before long, the orphaned child is found by slave traders who train him as a Gladiator. Years later he is discovered by Pompeii slave owner, and games organiser, Graecus (Joe Pingue), Milo (now known as “The Celt”) is then pulled from the remote countryside and brought to the bustling city under Mount Vesuvius. It's on his journey to the doomed city that he catches the eye of upper-class beauty Cassia (Emily Browning), the daughter of a wealthy Pompeii merchant (Jared Harris). She falls for him after he helps kill her injured horse. How could she not fall for him? When he gets to Pompeii he finds that Cassia's father, is trying to rebuild the city (how ironic) and in order to do so he is striving to make a deal with corrupt Roman politician Corvus (Kiefer Sutherland doing his best impression of a pantomime villain camps it up so much that you suspect that he has watched Kenneth William's performance in Carry On Cleo one too many times). As fate would have it, Corvus is the man who was responsible for the murder of Milo's family. Added to the mix and in between shots of the grumbling volcano there's a rivalry turned friendship as Milo fights against and inevitably bonds with fellow Gladiator Atticus (Adewale Akinnuoye-Agbaje).

Pompeii is certainly a B movie in every-way, its corny plot only being matched by its less than impressive 3D. Most of Anderson's film is shrouded in a grey murky fog (even before the volcano erupts) making the 3D somewhat disappointing.

Anderson as he has proved with the Resident Evil films is better with special effects than he is with plot. The ridiculous plot, or what there is of a plot, feels as if it's been tacked on in order to pad the story out until the main event arrives. When the eruption does come the effects are pretty spectacular, even if the 3d is poor. If you are going to see this cheesy piece of hokum don't take it too seriously and you might just enjoy it.