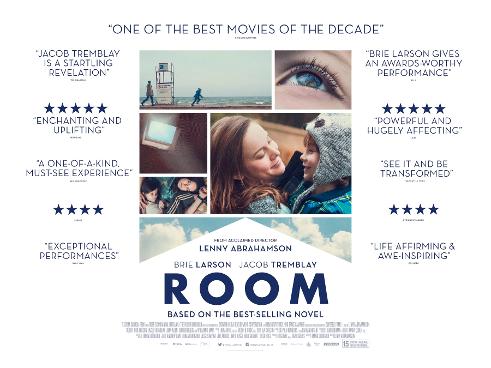 Lenny Abrahamson's powerful, emotional and occasionally heart-breaking film version of the best-selling novel by Emma Donoghue (who also wrote the screenplay). The story of young boy who has lived in a small room all his life and knows nothing of the world outside is vividly brought to the big screen.

Making this interior world seem so real and immediate is largely thanks to two extraordinary performances from Brie Larson and Jacob Tremblay as Ma and Jack. Tremblay in particular is on screen for the majority of the film and is a real find. While Larson continues to add to a body of impressive work.

Continuing his eclectic film choices (following What Richard Did and Frank), Abrahamson rises to the challenge of shooting in a small cramped location in inventive and interesting ways with 'Room' becoming as integral a character as Ma and Jack. Likewise, Donoghue tackles the challenge of bringing a story told on the page from the point of view of a five year old boy on to the screen without losing any of the uniqueness and relying too heavily on voiceover.

The second half of the film shifts into even more emotional territory as the mother/son bond is tested and I'll admit to quite a few teary-eyed moments (who am I kidding, I spent most of second half fighting back the tears in pretty much every scene). So fair warning to those who are susceptible to that kind of thing. Thankfully it never gets overly sentimental. Something you feel a more mainstream studio or director would not have achieved.

A beautiful score from Stephen Rennicks compliments an equally beautiful film. It really is something special and I urge people to seek it out.