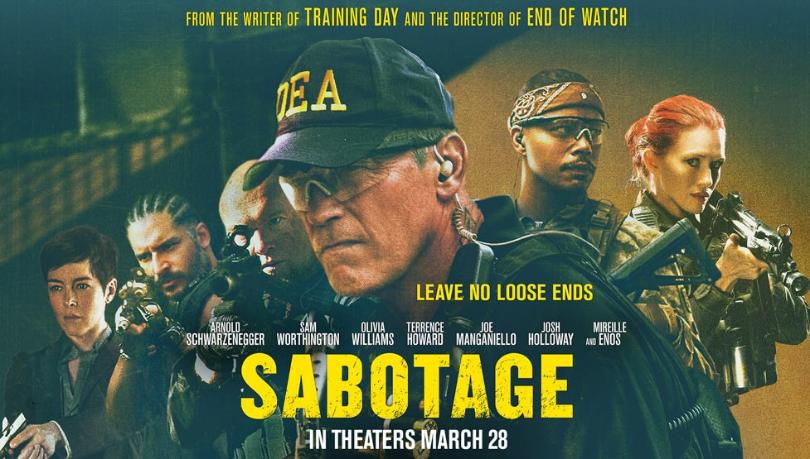 Arnold Schwarzenegger stars as tough as nails DEA agent John "Breacher" Wharton. We first meet Breacher and his team as they prepare to raid a drug cartels safe house. His team is made up of the usual stereotypical rebel rousing hard drinking SOBs' with nicknames that match their persona. The team include “Monster” (Sam Worthington), “Grinder” (Joe Manganiello), “Sugar” (Terrence Howard), “Pyro” (Max Martini) , “Tripod” (Kevin Vance), and the female of the team Monster’s wife Lizzie, why she doesn’t get a nickname like everyone else is anyone's guess.

Once in the house they steal $10 million dollars of the drug cartels money for themselves, stashing it down the toilet so that they can later recover it from the sewers under the house. However inevitably when they go back to retrieve the loot they find to their surprise that someone has beat them to it and it's gone. Despite destroying the evidence in an explosion Bleachers bosses somehow manage to find out about the missing money and the fingers are pointed at Bleacher and his team who are then suspended and placed under investigation.

After months of investigation no dirt can be made to stick on the team and The DEA inquiry into the lost $10 million is suddenly dropped and Breacher and his team are reinstated. Unfortunately they are no sooner back together when someone starts killing off the team one by one. At first the team believe that the drug cartel that they stole the money from is to blame but as the gang become more paranoid they start to point the finger at each other. It's now up to Breacher helped by local detective Caroline Brentwood (Olivia Williams) to find out who is responsible before the last member of the team is brutally murdered.

Much like Schwarzenegger's, who at times looks every one of his 66 years, recent films, "Last Stand" and "Escape", "Sabotage" most definitely falls into the B movie category. (Watch out Arnold or you'll become this generation’s answer to Charles Bronson). With the pedigree of the talent on show here, Sabotage was directed by David Ayer, the writer of “Training Day” (2001) and the writer-director of “End Of Watch", you would have expected much more than what we actually get. "Sabotage" for an action film is at times very slow, Schwarzenegger is given very little action wise to do throughout the film. The ending after the ending seems to be tacked on for no reason other than to give Schwarzenegger a reason to finally flex his muscles. Anyone going to see the film expecting him to be kicking ass is going to be sorely disappointed. It's also very bloody and certainly not for the squeamish, as the team is bumped off one by one each murder becomes more gruesome than the one before.

If you're a Schwarzenegger fan then there is no reason why you shouldn't enjoy “Sabotage". If you're not a fan then I would approach with caution.