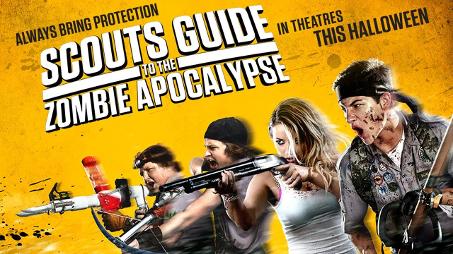 Scouts Guide to the Zombie Apocalypse is an enjoyable if somewhat unremarkable take on the Zombie film.

Unsurprisingly Scouts Guide is played for laughs as three Boy Scouts, who after a camping trip, are left behind in a small American town where all the residents have been evacuated and all that's left are those that have been infected by a virus that turns then into zombies.

The Scouts, aided by a shotgun-wielding stripper, have to then fight their way across town so that they can rescue other kids that are at a party and are oblivious to the fact that hordes of Zombies are descending down on them. To add to their troubles the army have decided that the only way to eradicate the zombies is to flatten the town by dropping a bomb on it.

What follows are a series of bad-taste jokes as the trio race across town finding more and more bizarre ways to kill zombies.

Scouts Guide to the Zombie Apocalypse is an enjoyable if somewhat forgettable crude splatter fest that's just about got enough laughs to keep an undemanding audience amused.

Scouts' Guide To The Zombie Apocalypse (15)