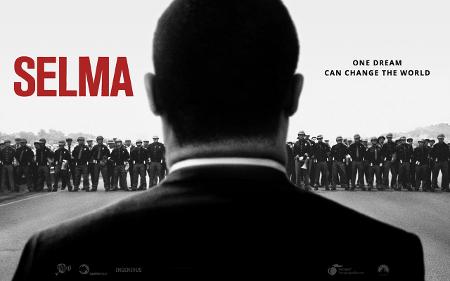 The Deep South of America was a dangerous place to be a black person in the 1960s.Whilst the landmark 1964 Civil Rights Act banished desegregation blacks were the subject of various arcane laws all designed to deny blacks the right to vote. If the law didn't stop them then violence and intimidation was a tool that was swiftly and ruthlessly used.

It was against this background that the town of Selma in Alabama was chosen in 1965 by Martin Luther King (David Oyelowo) as the place that he would lead a peaceful a civil rights protest march. The object of the march was to convince President Lyndon B Johnson (Tom Wilkinson) to give voting rights to black people. The town was chosen by King because of its racist history and the belief that there was a good chance that the law in the town, led by the racist governor George Wallace (Tim Roth), would over-react to the peaceful demonstration and thus give the civil rights movement much-needed media coverage.

The march which was to begin in Selma and finish in the state capital Montgomery got no further than the outskirts of Selma when the peaceful protesters were set upon by state troopers and local law enforcement officers.

The march is vividly and brutally recreated by director Ava DuVernay, the violence is shown with all its brutality as police officers armed with batons and clubs brutally set about the peaceful protesters.

The march from Selma is only a small part of the film as the majority of the running time is made up of back room deals and political manoeuvring as King negotiates with Lyndon Johnson and other civil rights groups. That's not to say that Selma is all politics as it's not, King is not shown as some kind of modern day saint, this is a man with flaws as he neglects his wife Coretta (Carmen Ejogo) whilst he focuses on his dream.

If there is one complaint it is that the first half, where we get to know the man that is Martin Luther King, can be a bit talkie which in turn slows down the narrative of the story. However it's a small complaint because by the end of Selma the some of what’s went before adds up to a wonderful cinema going experience.