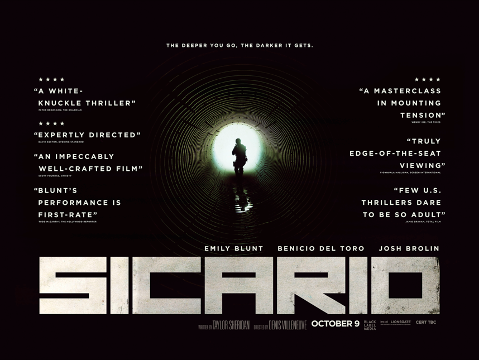 We're first introduced to FBI agent Kate Macy (Emily Blunt) when she's part of an FBI kidnap response team storming a house in Arizona. After she discovers that the house is full of dead bodies Kate catches the eyes of her superiors and is drafted into a multi-agency task force that has been set up to take on the Mexican drug cartels.

Kate then heads off to Mexico in Gravers private jet thinking that she's going to gather intel on the leader of a major drugs cartel but it soon becomes apparent to her that Gravers has his own agenda and he's determined to keep Kate in the dark as to what his true intentions are.

Sicario is not you're normal cops and robbers’ action film and anyone going to see it thinking that after watching the trailer is going to be seriously disappointed. Told from the perspective of Kate's character the audience is kept in the dark as to what's really going on, only being drip fed information at the same time Macy is. Seeing the story unfolding through Mercer's eyes makes for a slow and sometimes confusing story.

Whilst Blunts performance is a fine one she is a bit of a passenger in her own film being largely overshadowed by Brolin and Del Toro who both have meatier roles.

If you're going to see Sicario expecting to see a film full of shoot outs and explosions than tread carefully, however if you want to see a slow paced highly competent thriller with three great performances then Sicario could be right up your street.