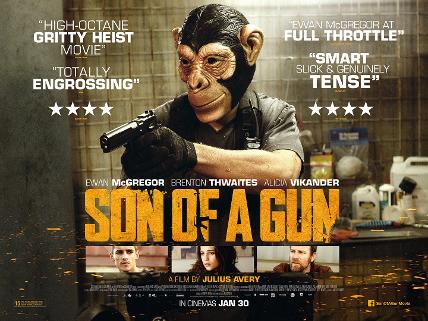 “Son of a Gun” is an Australian fast paced, edge of the seat action heist movie starring Ewan Mc Gregor (“Trainspotting”, “Star Wars”) and Brenton Thwaites (“The Giver”, “Malificent”). Thwaites plays JR, a dysfunctional 19 year old who finds himself, for reasons that we are never told, serving time in a brutal Australian High Security prison. As is the way of things in prison it’s not long before the young man finds himself targeted in the shower by some prison goons. Seeing what's going on cell-block head honcho and long term prisoner Brendan Lynch (McGregor) takes JR under his wing. Unfortunately Lynches protection comes at a price and JR agrees to a deal that he has to honour once he's released. Things move at a pace and it's not long before JR is released only to find out that the deal he's agreed to involves busting Lynch out of the jail.

Once on the outside, and after a spectacular escape, Lynch backed by an evil not to be trusted Russian mafia boss (Jacek Koman) persuades JR to join his gang and take part in a multimillion Dollar robbery of a gold mine. Needless to say as the movie hurtles to its brutal and unexpected conclusion deals are broken, friends become enemies and people are double crossed.

Directed by first timer Julius Avery, Son of a Gun is rip roaring ride from start to finish with spectacular car chases, intriguing story lines and great performances from everyone involved. Mc Gregor, in his broadest Scottish accent, oozes charm and charisma as Lynch and carries enough menace in his performance to make you believe that this is a man that friends would look up to and enemy's fear.