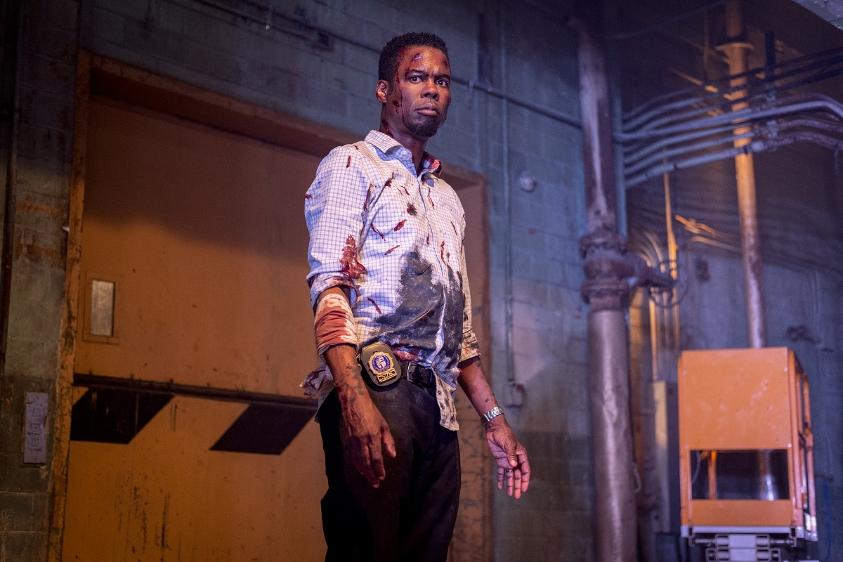 The Saw franchise began in 2004 before finishing with a seventh movie, the poorly received Saw 3D, in 2010. An attempt was made to rejuvenate the series with limited success in 2017 with Jigsaw but the less said about that the better.

For those that have no knowledge of the aforementioned movies Saw, and all its offspring’s, centre on a serial killer called Jigsaw. His favoured method of despatching his victims is to trap them in some sort of weird torture device where their only means of escape, as a clock ticks down to their ultimate death, is to mutilate their own body.

Now director Darren Lynn, who previously directed “Saw II”, “Saw III” and “Saw IV” has another go at raising Saw from the dead with a ninth outing, “Spiral: From The Book Of Saw”.

Spiral: From The Book Of Saw begins in the usual Saw manner with a member of the local Police Department being brutally murdered in a subway tunnel in a manner that would indicated that Jigsaw or a copycat is back to his old tricks. Tasked with catching the killer is Detective Banks (Chris Rock), an honest hard working cop who is treated with contempt by his fellow detectives as 12 years prior he exposed a crooked cop. As his fellow detectives start to get murdered in various horrible ways Banks, who is paired with a rookie (Max Minghella), must discover who the killer is before anymore of his colleagues come to a gruesome end.

As Banks starts to piece together the clues they start to point to his own past when it starts to become apparent that Jigsaw himself is determined to rid the city of bad cops.

As tends to be the way of horror movies Spiral has plot holes that you could drive a truck through, Samuel L Jackson adds some credibility to the whole thing when he turns up as Bank’s father but then mysteriously disappears for most of the movie. And anyone familiar with the series will probably see the Scooby-Doo reveal at the end coming from a mile away.

Rock is good in the role as the honest detective, he even has time, in-between the maiming and the bloodshed, to throw in some of his trademark wisecracks. Spiral: From The Book Of Saw certainly manages to blow the dust from the old franchise and with the merging of two movie genres, the detective movie and the horror film, Lynn might have just given a once dead franchise a new lease of life.