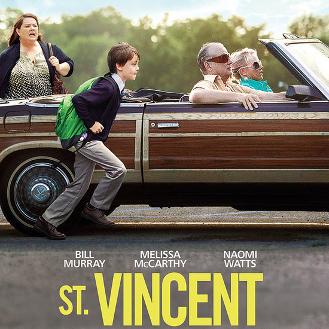 We first meet Vincent (Bill Murray) when he's having sex with a pregnant Russian stripper and lady of the night called Daka (Naomi Watts). He's then being threatened by loan shark Zucko (Terence Howard), who threatens to do him some harm if he doesn't pay off his large debt that's Vincent owes him. Vincent then makes his way to his local bank, where after abusing the teller, he finds that his account is overdrawn. The next time we see Vincent he's drunk and crashing his car into his own fence, he then knocks himself only to wake up, with a huge hangover, to find that a removal truck has knocked a large branch from the tree in his garden and it's crashed onto his "vintage" convertible car. As you can gather Vincent is not a nice man and certainly not the type of man that you would want to leave you're 12 year old son with.

Moving in next door to Vincent, and the person who hired the removal men who damaged Vincent's car, is newly separated single mum Maggie (Melissa Mc Carthy) and her 12 year old son Oliver (Jaeden Lieberher), a polite and timid young boy who struggles to find friends at his new school. Harassed and under pressure Maggie fails to pick Oliver up from school one day and unable to get into his house because bully's have stolen his keys and mobile phone, Oliver turns to Vincent for help. After watching him until his mother returns home, the pair have sushi for dinner, sushi for Vincent is a can of sardines, Vincent agrees to baby sit the boy after school for $11 an hour.

Vincent's idea of babysitting is to take Oliver to the horse racing, bars and hanging around with woman who are less than virtuous. Needless to say the pair bond and each learns from the other.

St Vincent is a wonderful movie that is made so entertaining by an outstanding performance from Bill Murray, if there's justice in the world them Murray's name will be one of the first read out when this year’s Oscar nominations are announced. That's not to say that the others in the stellar cast don't shine, because they do, Lieberhers is fantastic as Oliver whilst Watts character could have veered towards a stereotype caricature of a tart with a heart, instead she's the glue that binds this wonderful tale together. Mc Carthy also shows that she is a fine dramatic actress and not the one trick comedic pony that some might think.

St Vincent is not to be missed.