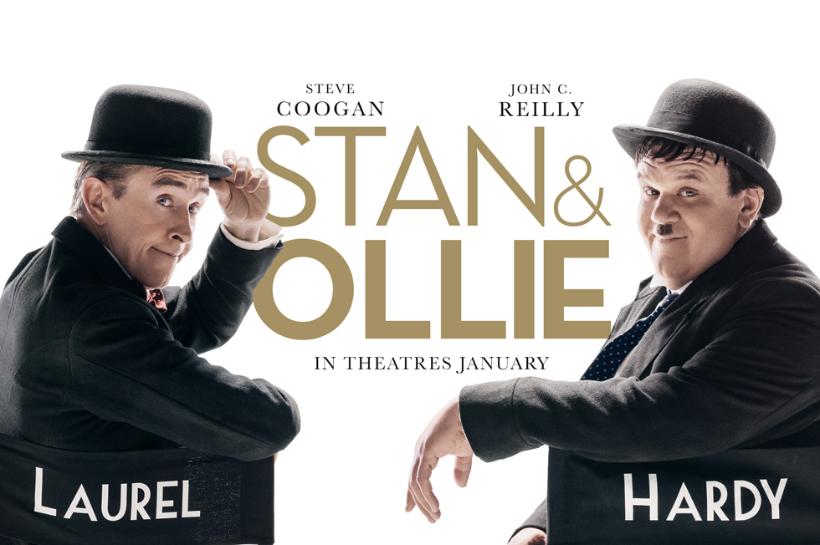 In the late silent/early talkie periods during the 20’s and the 30’s Laurel & Hardy were one of the greatest comedy teams in the world. However their popularity had started to wain in the 50’s when comedy tastes started to change. In director Jon S Bair’s loving biopic of the comedic pair this in no more in evidence than when, whilst walking through the studio backlot, the pair walk past a massive billboard advertising the latest Abbot and Costello film.

By 1953 the pair were yesterday’s men and facing an uncertain future they tried to rekindle past glories by setting out on a variety hall tour of Great Britain.

It’s this period that’s brought back to life wonderfully by John C Reilly as Oliver Hardy and Steve Coogan as Stan Laurel, their performances appear to be more than just impressions as there appears to be a genuine love for the original actors by the pair that are playing them.

That’s not to say that the pair’s long term friendship and working relationship was all smooth sailing. By the time of the tour Hardy’s health was failing and at first audiences were slow to turn out, the pair often playing to almost empty theatres. Tour promotor Bernard Delfont (Rufus Jones) doesn’t help the pair’s mood when he likes to keep reminding them that Norman Wisdom is playing to packed houses in his other theatres. In front of rows of empty seats the pair go through their famous comic routines, Coogan and Reilly masterfully recreate a scene from their 1932 short County Hospital that involves Stan bringing some hard boiled eggs and nuts to Ollie whilst he’s laid up in a hospital bed with a broken leg.

Feeling let down by the whole experience the pair’s wives, Ida Laurel (Nina Arianda) and Lucille Hardy (Shirley Henderson) travel from America in order to give the pair some moral support. Arianda is particularly good and almost steals every scene that she’s in.

That’s not to say that Stan & Ollie is all bad times for the pair as eventually, in-between the pair bickering over their past history, the public do start to turn up in numbers and eventually pack out the theatres where the pair are performing. It’s at about this stage where Stan & Ollie falls down a little, whilst it easy to see that the pair have fallen on hard times, it’s more difficult to see that there was still at the time, a genuine affection for the pair.

Stan & Ollie is a nice reminder of how popular the pair once were, it’s hard to see a young audience filling a cinema, but I’m sure that any cinema audience will be, like that audiences that turned up to see them live, people who remember how funny they were and still are.

Recommended (if you’re a certain age)