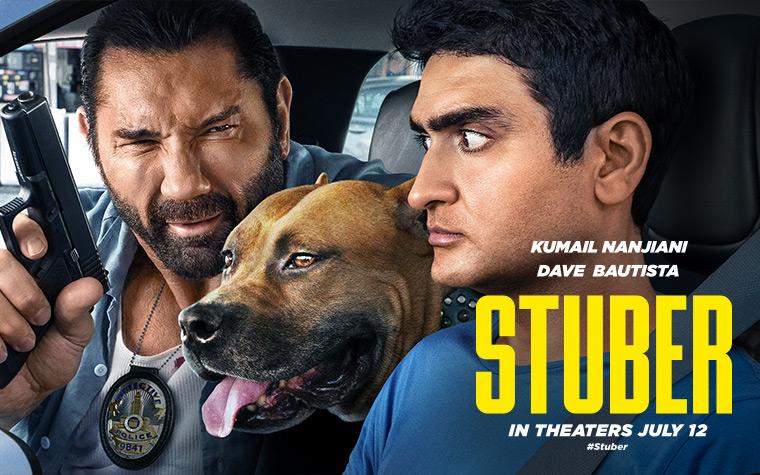 Dave Bautista is Vic, an LA cop on a mission to capture the drug lord responsible for killing his partner some month’s previously.

Just after having minor surgery on his eyes, which causes him to have blurred vision, Vic receives information regarding the whereabouts of the killer. Against the advice of the surgeon, and wearing what looks like a pair of ski goggles, he takes off in his car. Unable to see the road in front of him he ends up crashing his car into a ditch. Forced to abandon his car and and with no other way of getting to his destination he summons an Uber.

Turning up in his electric car and desperate to please his customers, so that he can get a 5 star review, is Stu (Kumail Nanjianl). Stu as well as being a part time Uber driver also works in a sporting goods store, at the store his bullying boss gives him the nickname Stuber, Stu Uber, get it.

Partly because he feels compelled to please his customers and wants those five stars – a constant running joke - and partly because Vic forces him, “blind cop kidnaps Uber driver” Stu keeps telling a short sighted Vic as he drives him around LA looking for the bad guys.

Stuber feels like the type of buddy cop movie that used to get made in the 80’s and 90’s, Tango and Cash, 48hrs, Lethal Weapon and Rush Hour to name but a few. Sadly Stuber isn’t a patch on any of the aforementioned, the jokes are lame and the action, when it happens isn’t practically exciting.

That’s not to say Stuber is bad, it’s certainly not great, but if you’re looking for a piece of escapist nonsense that’s no better than a straight to DVD movie, there might be just about enough here to keep you mildly amused.